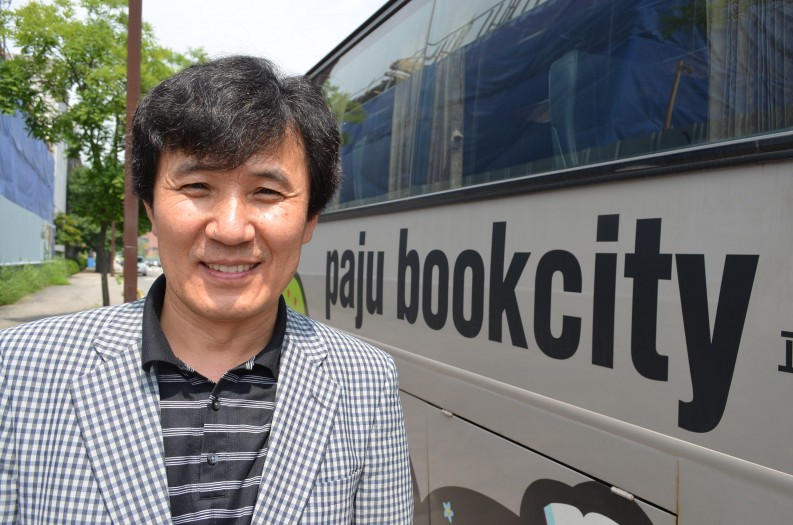 PAJU, SOUTH KOREA: Publishing isn’t like this in the west. Imagine a town where every single building is related to the books business; where every single person you pass in the street is in the same line of work; where signs on the sidewalk say things like “Bookcafe Beautiful Peoples;” and where the publishers even pay for branded buses to bring their staff to work. Welcome to South Korea’s Paju Bookcity.

Originally conceived back in 1989 by a group of publishers who wished to create a kind of model village that would have books and book production at its heart, the intention was for all members of this book community to place “common good” above “ruthless self-interest” and for staff to work in buildings whose architecture was in harmony with the environment.

Certainly, of all the places visited by the UK book trade’s fact-finding mission to South Korea last month, as part of the run-up to Korea’s position as Market Focus at the London Book Fair in 2014, this was arguably the most peaceful, even harmonious, although this may have been as much to do with relief at getting away from Seoul’s urban sprawl and traffic as any formula for a model community.

With active support from the government, the first stones were laid in 2001 – for the Asia Publication Culture and Information Centre — and today this “new town” of around 150 buildings is home to some 200 publishing companies, including the country’s most influential houses such as Mun Hak Dong Ne and Chang Bi, publishers of Kyung-Sook Shin, author of Please Look After Mother which won the Man Asian Book Prize.

It’s undeniably a fascinating experiment in town planning. To see so many sides of the industry, from editorial offices to warehouses to small, funky, bookshops-and-cafes in one place is peculiar. It is as if the book trade has been reduced to a giant board game, laid out on quiet, tree-lined streets, interspersed with wooden benches. It is also a little like walking around a book kibbutz. One couldn’t help find it heartening to see a country treating books with such respect.

One building, named Alice’s House, housed a children’s bookshop and café and even had its own railway running around the outside. Over there on the grass was a giant sculpture of stacked books, while just along the way was the Moveable Type Workshop, with its racks of leaded letters and ancient typesetting machines. Another building held an exhibition of US titles concerning the Korean War to commemorate the 60th anniversary. The covers were full of the flavor of M*A*S*H, the 1970s TV series set during the war.

Paju lies some 20 miles north of Seoul, not far from the North Korean border. The connecting motorway from the capital follows the Han River that leads to the Communist North and has barbed wire and lookout posts the whole way, a throwback to days when the South feared a lone spy might emerge from the water. Today, these sentry towers are empty and satellite technology is used to monitor the water; indeed, the fence itself is due to come down soon.

However, concerns remain and four tunnels had been discovered beneath the border, the last in 1990. There is speculation that as many as 20 could exist. One can almost imagine the head of a party faithful popping up in the middle of an editorial meeting in Paju. It is hard to know who would be more surprised… Sang Lee is director of the Paju Bookcity literary festival.

Some 10,000 people work in Paju Bookcity, which covers a large area and is divided into three districts: a Publishing District, a Printing District and a Support District. The overall complex is owned by the Ministry of Culture, Sports and Tourism.

It has its own booksori, or festival every year, which sees some some 450,000 visitors over nine days and around 200 author events. The Festival’s founder and director, Sang Lee, who also acted as Bookcity spokesman during the tour, said: “There was no festival before and I wanted to lengthen the life of books, and have an intellectual gathering. We held our third booksori this year and since 2003 we’ve also held a children’s book festival every May.”

Paju also has its own book awards given to Asian books, Asian writers, Asian book designers and to publishing companies and editors “who have dedicated themselves to the development and promotion of Asian publication culture.”

Lee‘s background is in publishing. He worked for three houses for 15 years and then from 1997 helped establish Heyri, the artists’ village close by that operates in a similar way to Paju. He studied History and has a Masters in Arts Administration and likes to read “everything.”

“We have many visitors here — from Japan, China, South East Asia — and we have also invited many writers, such as Alain de Botton [How Proust Can Change Your Life, The Consolations of Philosophy], J.M.G. Le Clézio [winner of the Nobel Prize for Literature in 2008] and Guy Sorman [the French writer and intellectual], as well as Richard Booth, founder of the Hay Festival.”

Booth founded the International Organisation of Booktowns (IOB), of which Paju is now a member. The IOB describes Paju as “a tense military area, located south of the Demilitarized Zone, which is the border between South and North Korea. In this context, Paju Bookcity has strikingly transformed the cultural landscape of this region while conglomerating more than 150 cutting edge architectures.”

Paju Bookcity has received other international recognition too. In 2012 it received the Best Technology in the Field of Culture Award in the annual Sheik Zayed Book Awards at the Abu Dhabi International Book Fair. The publishing industry is phase one of the Paju complex. Planning is now well underway for phase two which will see some 30 film companies, film software companies, animation houses and TV production companies moving into purpose built spaces and forming a ‘content cluster’. “We’re inviting people from these areas to set up base in Paju where the rents are lower than in Seoul,” explained Lee. “And we are expecting there to be many syngergies.”

The initiative is indicative of the importance South Korea’s new President Park Geun-hye is placing on “content.”  She is keen to exploit the country’s “soft power,” its elements that make up the successful Hallyu or Korean wave — K-pop, K-film, K-soaps, K-webtoons (manga-style online cartoons) — and she wants to add these “content” exports to the list of manufactured goods (mobiles, cars, etc.) for which Korea is already famous.

The intention of course, is that K-Lit will now be added to this list. The LBF’s Key Accounts Manager International, Amy Webster, along with Emma House, Director of Publisher Relations at the Publishers Association, and the British Council’s Literature Advisor, Rebecca Hart, were all in Seoul, meeting with Korean publishers, agents and literary organizations such as Arts Council Korea to begin the process of selecting authors and to plan events for next year’s market focus program. The LBF’s Digital Manager Broma Patel was also in the party, discussing the new digital element of the market focus with major players.

Webster and House found the visit to Paju fascinating — particularly the Moveable Type Workshop — and Webster is buzzing with ideas for LBF 2014. “Being in this extremely vibrant city and having the opportunity to meet with a dynamic range of publishing, technology, literary and translation individuals reminds us why Korea is a top ten global publishing market. We can’t wait to welcome the “Korean wave” to London next year and hope that the energy, innovation and enthusiasm which we have experienced here will travel to the London Book Fair 2014.”

Meanwhile, it’s fun to think of those bookcity buses trundling back and forth, demonstrating that there is another way to construct a book community.