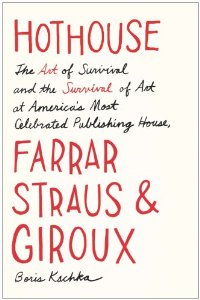 FSG is one example of a publisher thought to put authors and books first, but Boris Kachka’s forthcoming book reveals the sacrifices and compromises of maintaining such an ethos.

In today’s feature story, the highly respected publisher and author Michael Krüger, who will soon retire after 45 years at at Carl Hanser Verlag, reflects on his carrer and the uncertain state of literary publishing. Among his observations is the the emergence of large conglomerate publishing over the last 40 years has been hugely destructive to small independent publishing and the ethos that represents.

He notes, when discussing conglomerate publishing, “Even a good publisher can’t read more than a hundred books a year, and because publishers should not publish more books than they can read, my sole explanation is: if they publish more books than that, they must not want to read them. It is depressing that there are publishers in this world who don’t like to read the books they publish.”

Underlying this thought is the suggestion that the drive for profit has been damaging to literature and literary production, and that publishers willingly publish books that they themselves are not proud of and have, ultimately, compromised their integrity for the sake of the bottom line.

Krüger also laments the reading tastes of the mass market, noting “People thought that with digitization, the good books would be easier to get. But the problem is that most of the readers love bad books! I have no explanation for the fact that modern societies have invested tons of money into schools and universities only to find out that horrible books are much more loved than the good ones…”

Much of this assumes that publishers share a set values and operate under an ethos to put out the very best books, those that advance the culture, with profit being a secondary motive. Of course, today, publishing takes on many meanings. It covers everything from the individual publishing the debut novel by the 2025 Nobel Prize-winner as well as the guy who just five minutes ago collated a half-dozen Wikipedia entries and is now selling the resulting document as as a “book.”

In November 2010 I asked, “When Does a Self-publisher Constitute a Publishing Company?” and suggested that the honorific of “publisher” truly belongs to those to take responsibility for the work and well-being of another person, in addition to their own.

I was, of course, assuming that the word “publisher” is an honorific at all. Some would call that my first mistake.

But for the sake of rhetoric, I would argue that today for “publisher” to be an honorific at all and to command the respect and authority that we have been accustomed to bestowing on publishers, it requires something more: publishing books that advance the culture. In this sense, not only is the publisher required to take responsibility for themselves and their authors, but they are taking responsibility for the culture itself.