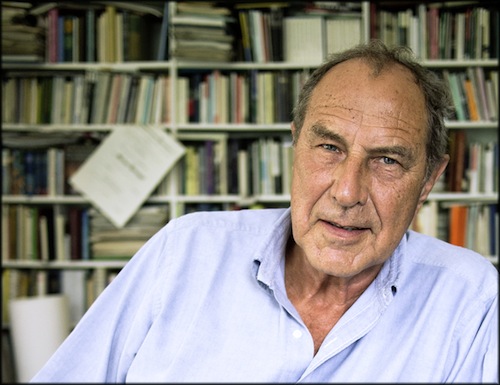 Michael Krüger is publisher at Carl Hanser Verlag in Munich, where he began working as an editor in 1968, rising to literary director in 1986, and publisher in 1995. He has developed a reputation for his dedication to quality literature, translation, and poetry, which in turn has shaped the face of Hanser. He won the London Book Fair’s 2013 Lifetime Achievement Award in International Publishing. He will retire at the end of the year.

Krüger is also an author himself (published by Suhrkamp Verlag), winner of numerous prizes, including the Prix Médicis étranger. Several of his novels and volumes of poetry are available in English.

Publishing Perspectives spoke with Krüger about the state of publishing, his legacy, and his plans:

PP: You’ve made a series of YouTube videos called “Michael Krüger Speaks” briefly covering important issues in the publishing industry. In one of those videos, dedicated to translation in the United States, you lament that what little foreign literature makes it into English is mostly brought out by small houses and is rarely available in bookstores. What words do you have for English-speaking publishing professionals on this topic?

Krüger: Of course I am unhappy with the fact that European publishers are translating a lot of the good, and a lot of the mediocre, and even a great deal of the bad books from the States into European languages, whereas our American friends are very reluctant. With the exception of Knopf, only the small houses like New Directions or Other Press are constantly translating from Europe. For example, much of the work of Robert Walser, one of the best German writers of the 20th century, is coming to an American audience only now. But he was a contemporary of Franz Kafka! And only very few European poets have been translated into English, whereas German translators and publishers take the risk of translating great English and American poetry.

At the same time, under your leadership Hanser has published a good deal of high-quality translated literature, including Nobel-prize winners such as Orhan Pamuk, Derek Walcott, and Tomas Tranströmer. What do you consider to be Hanser’s greatest foreign contribution to German literature in the past decades?

We are always interested in translating and publishing foreign authors, from all countries. We are probably more curious to know how writers in other countries think. If we believe that literature still has a meaning, it should be taken for granted that we translate it. I don’t know if Hanser ever made any contribution to literature, but we tried hard to publish only good books. Life is too short to waste your time with bad books.

You also publish home-grown Nobel winners, like Herta Müller. In fact, you’ve been described as a “regular” at the Nobel ceremony. When Hanser signs an author, do you sometimes think “This one has a good chance for the Nobel”?

No, I never think that this or that writer could get the Nobel Prize one day. Whenever I thought he or she should get one, I was wrong: Italo Calvino, Jorge Luis Borges, David Grossman, Philip Roth, and many others should have received this prize, but never got it. The Nobel Prize should be given every month, so that at least twelve writers a year could go to Stockholm.

I’ve heard you’ve never read an e-book, and you’ve also resisted the commodification that replaces the words “books” and “literature” with “products” and “content.” But books and literature also change with time. Do you think we are entering an increasingly impoverished literary age?

I only know there are good and interesting books, and bad ones. You can read them on paper or on the screen, I don’t care. I only get nervous when people are constantly reading second-class books, when reviewers praise third-rate books, and when booksellers put bad books in their windows. Since book publishing became a mass-market business, the quality level is constantly sinking. But there are still very good books around, in every country! The problem is that people can’t get them because they are hiding. People thought that with digitization, the good books would be easier to get. But the problem is that most of the readers love bad books! I have no explanation for the fact that modern societies have invested tons of money into schools and universities only to find out that horrible books are much more loved than the good ones…

What changed in the last forty years: the enormous appetite of the conglomerates to buy more and more independent publishing houses. Even a good publisher can’t read more than a hundred books a year, and because publishers should not publish more books than they can read, my sole explanation is: if they publish more books than that, they must not want to read them. It is depressing that there are publishers in this world who don’t like to read the books they publish. It is hard to imagine that under those circumstances the independent publishers can survive, but we try.

Which brings us to Suhrkamp. You’re an outspoken admirer or the house, and also perhaps their closest competitor. They’ve truly entered unchartered waters with the new bankruptcy proceedings; what do you imagine things might look like at Suhrkamp three months from now?

I really do hope that Suhrkamp is presenting a plan for how to get the business back in working order. Suhrkamp is the most prestigious literary house in Germany, or even in Europe (together with Gallimard), where all the great philosophers and writers have published their books. It is unbearable to think that this intellectual capacity will be destroyed.

It took a long time to choose who might follow you. What were the characteristics that ultimately made Jo Lendle [currently publisher at DuMont Buchverlag] the happy candidate?

Jo Lendle was chosen by the board of Carl Hanser Verlag. He is a young, good-looking, educated and friendly person, so I hope that Hanser made the right choice.

What challenges will Lendle face when he takes the helm in 2014?

Well, he has a lot to do, and his main job will be to keep Hanser independent. We have a little company in Austria (Zsolnay/Deuticke), a little house in Switzerland (Nagel & Kimche) and in Berlin (Hanser Berlin), so he has a lot to do to synchronise all these smaller houses with Hanser.

Though you’re retiring at the end of the year, you’ll continue to be involved at Hanser in some capacities. Journalists often note that you’re “irreplaceable.” In what areas will Hanser continue to need you?

I am not so sure what I am going to do for Hanser in the future. But I will definitely sit next to the telephone at home to answer questions.

I read that when you retire, you’ll be working on a novel. Do you already have specifics of the project in mind?

Yes, I will work on a new novel. It is called: The Testament. Or: My Last Will.

DISCUSS: Today, What Does “Publisher” Actually Stand For?