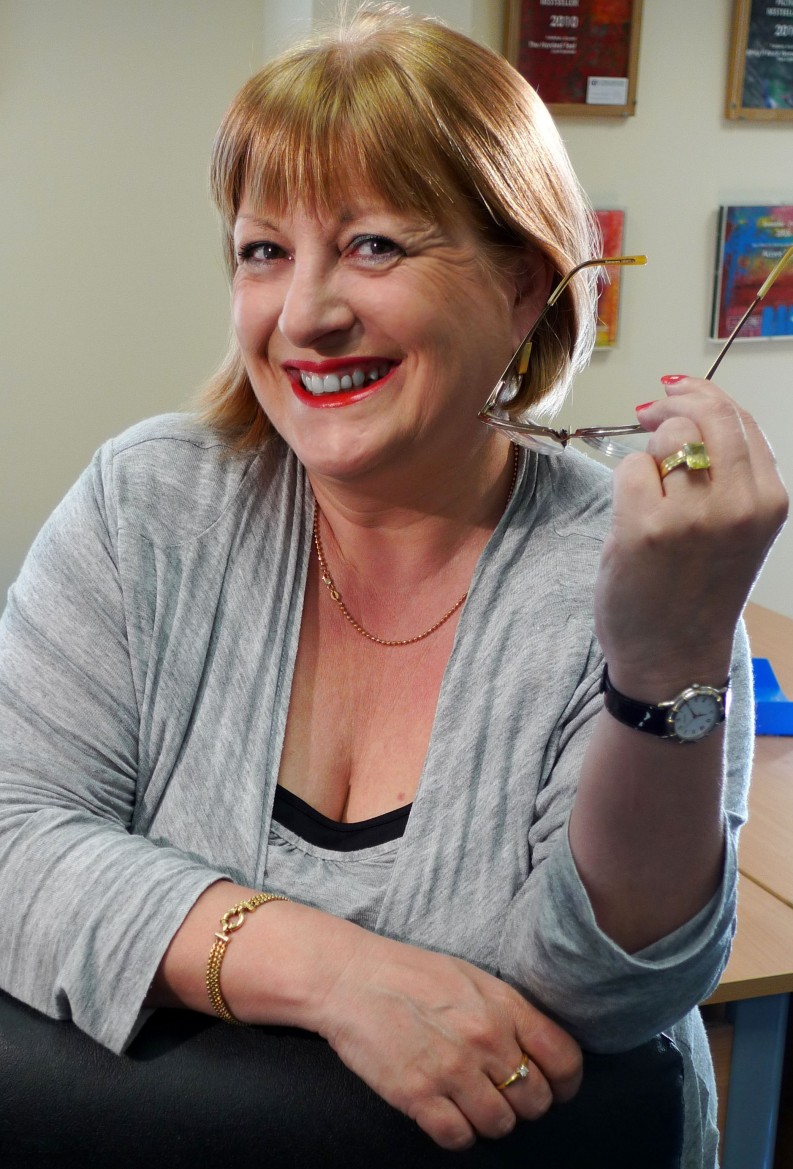 Hazel Cushion started the company as a single mother of triplets.

Publisher Hazel Cushion might appear a little “too mumsy and middle-aged” to appear on the cover of one of her own titles, but she clearly knows her business. Top sellers for Xcite move 30,000 copies or more. And the company has recently launched it’s own app — the Kama Xcitra app, which offers 3D (yes, 3D…) views of 69 sex positions. Cushion notes that it was important to off views in 3D “because in [books] it’s hard to tell where to put your arms.” How true.

Publishing Perspectives recently sat down to talk with her about the evolution of her company and its success.

“…erotica as a five minute read can switch you out of day mode and into play mode.”

PP: You started your company at your kitchen table. Can you tell me a bit about the early days?

Cushion: I started my company [Accent Press Ltd] ten years ago when I was a single mother to six year old triplets. I’d just completed an MA in Creative Writing and was looking for a home based business that I could run. The internet and advent of desk-top publishing software made running a publishing company viable and I was able to work the hours around my kids — I’d work while they were at school and again when they’d gone to bed — they had very early bedtimes! Quite quickly I was able to employ an assistant and she was able to keep the office running when I was tied up with the kids. There have been many benefits for the children — I was always there if they were sick and they all have a strong work ethic and a can-do attitude. I really believe that seeing the ups and downs of running my business has helped prepare them well for life and they are not scared of tackling things or failure. Learning to learn from mistakes is perhaps the greatest lesson of all.

What gave you the idea to launch Xcite? I launched Xcite books five years ago after realizing that there was a gap in the market for thinking girls’ fiction aimed at women and couples. The sort of fiction that didn’t insult your intelligence, had three-dimensional characters and celebrated female sexuality in all its forms. I found what was available tended to be pretty derogatory to women and there was very little short fiction. Short stories work really well for erotica, as a five-minute read, can switch you out of day mode and into play mode. I think there’s a reason that monogamy and monotony are very similar words but sex is the vital glue that can hold a relationship together. Sex therapists recommend our short story collections as they are great way of adding interest and introducing new themes to a relationship.”

What have been the biggest surprises? Are there any titles/themes that sold more than you anticipated? Less?

The whole thing has been an almost vertical learning curve but it has been enormous fun too. I have learned a massive amount about myself, my strengths and weaknesses and am now able to build a team that complements those – I think that surrounding yourself with people that get your vision is essential in growing a business. I suppose the biggest surprise was that I could do it – I have even been invited to Buckingham Palace to meet the Queen in recognition of the contribution of women to business in Britain. That was a big surprise and a great honor!

Finding out who our customers are has been very interesting. Over 60% of our gay male on male books are sold to female readers and most readers are over the age of 45 — as they say, sex is wasted on the young! What was the thinking behind Kama Xcitra?

The Karma Xcitra is the world’s first 3D Kama Sutra using Augmented Reality. It is a great combination of old and new technology with the augmented reality bringing the book images to life in a truly outstanding way. Once the reader has bought the book they download the free app which works on all Apple and Android devices. Holding the app over the image causes a fully rotatable 3D image to appear and you can then change the skin and hair color, add music, email, or add the position to social media. You can also lock-off the image so it can be viewed away from the book, a useful feature as performing the positions while holding an iPad would be ultra tricky!

You’re based out of a small town in Wales. What has the reaction of the locals to your publishing company?

Yes, the company is based in a small Welsh village but we have had a great reaction because we have brought employment to an ex-mining community. The internet is like the advent of the railways over one hundred years ago — it is enabling people to bring work to small communities and that is a huge benefit for the communities and the environment.