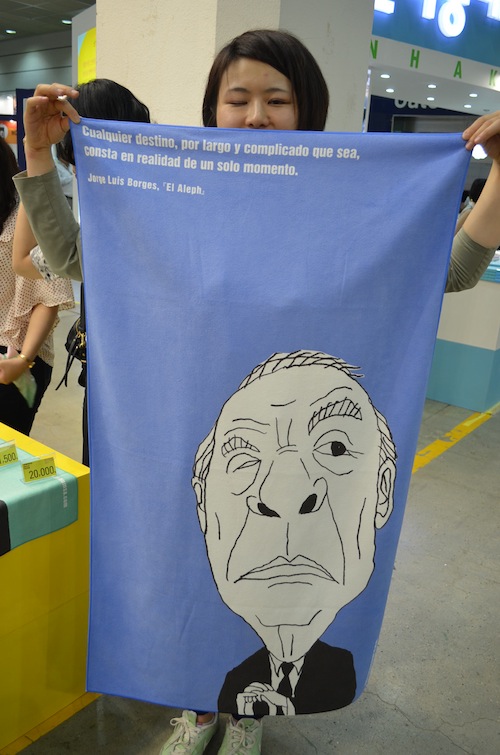 Borges beach towel, the must have item for cool Korean literati

One of the joys of attending book fairs is stumbling on those titles or publishers that you hadn’t heard of, or those innovations that you haven’t seen before. It’s that old discoverability issue again. There were two good examples in Seoul last week at the international book fair.

Feeling intellectual on your summer vacation? Then why not take Jorge Louis Borges to the beach? No, not just his books — we’re talking about a beach towel bearing a giant image of the late Argentine author. You can take his books too, of course, in a see-through, waterproof beach bag that also bears his name and image. Won’t you just cut the intellectual dash on the sand now? Francis Van Maele traveled all the way from a tiny island off the coast of Ireland to sell his artist books.

Just around the corner was something equally unexpected. There can be no greater contrast than the tiny hamlet of Dugort on Achill Island (pop. 2,000) in County Mayo, off the west coast of Ireland, and the freeways and highways of super-connected Seoul (pop. 10.5 million)  Yet here was the tiny, two-staff publishing house Red Fox Press, exhibiting their highly original, eccentric, hand-made books of artists’ work at their 10th Seoul Book Fair. The titles cost between 20,000 KRW and 470,000 KRW ($410).

Founded by Francis Van Maele, who is originally from Belgium and worked in publishing for Editions Phi in Luxembourg for many years, the company is a publishing version of “the slow” movement. “It’s out answer to this digital world,” said 65-year-old Maele, who runs the company with his partner Antic-Ham. “We make everything by hand, often producing just single copies or perhaps a “print” run of five or six. We often just print them using a simple computer printer and then bind them ourselves. We also make books using Polaroid cameras.”

They sell the books directly to art and graphic design students, and frequently exhibit at specialist art book fairs in London, New York and Los Angeles. They also sells off its own website. “Our thinking is not very commercial,” says Maele with a smile. “But I love the way this is our tenth year at Seoul and we can still live at the edge of the world and sell worldwide.”