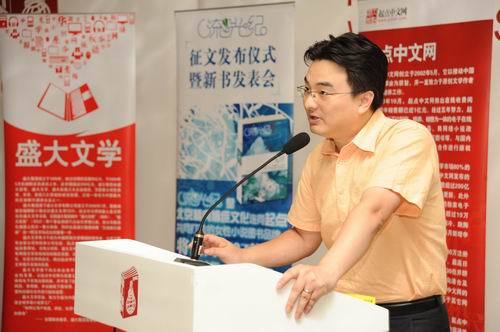 Luo Li — pictured above — has been accused of stealing copyrights from Qidian, but this may be a strategy to prevent him from launching a competing business. (Photo Credit: EEO)

The Economic Observer Online (EOO) reports that Qidian, China’s largest online literature site, is in the middle of a major scandal after it was reported (and since confirmed) that its founder, Luo Li, has been arrested for selling copyrighted material that belonged to Qidian’s parent company Shanda Literature.

According to techinasia.com, a source close to Luo says that he has not been charged with selling copyrighted material, but instead has been charged with accepting bribes in total of RMB 200,000 ($31,000) in a copyright negotiation. Luo, along with much of the Qidian founding team left his position at both Shanda and Qidian earlier this year.

EOO argues that “while Luo’s case could be yet another example of disrespect for intellectual property in China, Qidian has actually shown a viable online model that sells books at prices low enough to discourage piracy, while at the same time providing a respectable income opportunity for authors.”

Qidian was founded in 2002, at a time when people were doubtful that writers could in fact make money selling books online. But just two years later, when it was purchased by Shanda, it was the 35th most popular website in China boasting over 1 million registered readers and 20,000 writers.

To recap — as we’ve covered Shanda extensively over the years — here’s how it works: the Qidian model allows writers to submit stories that readers can download for free — at least at first. But if the stories become popular, the authors can become a VIP member and start charging for their work. When this happens, “readers are charged 2 fen for each 1,000 words of a story they read (1 fen = 1/100th of 1 Yuan). Readers can download part of a story for free and then pay for the rest in installments once they reach a certain point. (One Yuan = approximately $0.16). 70% of the money goes to the writer — the rest goes to Qidian. And so while the price for readers is next to nothing and just a few Yuan for a full-length book, royalties can add up quickly for writers if they’re able to capture a large audience.”

There’s also a bonus system that can earn writers even more money. Each month, VIP members can vote on their favorite novels — the winning authors then earn bonuses of up to 10,000 Yuan. There’s even a “tipping” system that allows VIPs to either give writers extra money directly or buy votes for them. The result? Writers eager to do everything in their power to please their readers.

As a result of this, Qidian has made millions for its authors. At the end of 2012, according to EOO, a “rich list” for Chinese literature was revealed, and 31 year old Zhang Wei (who writes using the pen name Tangjia Sanshao) was listed as the richest man in the world of Chinese online literature, with earnings of 33 million yuan over the preceding five years. Of course, to earn that much money, Zhang pumps out an average of 10,000 characters per day. And when asked what it was like to write 26.9 million words over that period, he simply replied, “My hands are sore.”

Despite the potential upside for authors, there’s a sticking point: Qidian’s copyright policy. According to Economic Observer Online, “If an author wants to get VIP status and charge for their work, they must give Qidian the full copyright and ownership of the work. This is apparently part of the reason why Luo Li and the rest of Qidian’s founding team left the company earlier this year in order to start a new literature company with Tencent,” one with what is said to have a copyright policy that’s more fair to authors.

Unfortunately, given news reports, it seems likely that the new site might never make it off the ground. Shanda has argued that launching a new literature company violates a non-compete clause in Luo’s contract (which sources claim doesn’t exist) and has threatened legal action should the company move forward. Indeed, Caixin reports industry analysts as saying that Luo’s arrest is simply an attempt by Shanda to keep Luo and his team from joining a competitor’s online platform.

And as techinasia.com concludes, “If all the rumors are true, both Shanda and Tencent could be in some trouble, as other Shanda employees might also have been illegally selling copyrighted works, and given the rumored cooperation with Tencent after Luo’s resignation, it seems very possible that Tencent was the one buying them. But as of yet, we really don’t know all that much beyond that whatever else is true, Luo Li is definitely in trouble.”

DISCUSS: Is Working with China Worth the Effort? Two Entrepreneurs Say “Yes”