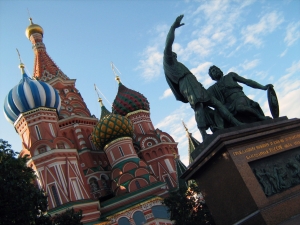 Despite difficulties at home, Russia intends to enhance its presence at international book fairs, such as at BookExpo America pictured here.

The Russian book publishing industry is on the verge of big changes, as the national government has announced plans to provide more than $100 million of support for its development until 2018, which is expected to take place as part of the federal target program “Culture of Russia.”

The provision of investment is an acute need, due to the perceived crisis in the domestic book publishing and book selling industry, as well as the decline of interest in reading among the local population.

In recent years the Russian book market has significantly declined, with the average annual contraction of five to seven percent. Current estimates value the market at RUB 60 billion (USD$2 billion), though this continues to decline.

According to data of the Russian Book Chamber, last year 116,888 books and brochures were produced by domestic publishers with the total circulation of 540.5 million copies. This is nearly 5% and 12% lower respectively, compared with 2011.

According to Vladimir Grigoriev, Deputy Head of the Federal Agency for Press and Mass Communications, the current situation in the industry remains “complex,” and has been exacerbated by a prior lack of attention to the problems from the government.

However, it is possible that much can change in the near future. A majority funds under the new “Culture of Russia” program will be allocated for the publication of books of Russian authors and their translations into foreign languages.

According to Gennady Kudiy, deputy head of the Office of the Russian state department of periodical press, publishing and printing, preference will be given to science, technology, encyclopedic literature, as well as publications on culture and art.

And special attention will be paid to promoting leading Russian book fairs — in particular the Moscow National Exhibition “Books of Russia” and St. Petersburg International Book Fair — and attracting new participants with the hope of bolstering Russia’s reputation in the international arena.

There are also plans to invest funds in the promotion of books, written by Russian authors at international exhibitions in Kiev, Minsk, Frankfurt, Paris, Warsaw, Beijing and other cities. According to the press service of the Russian Ministry of Culture, part of the funds will be also invested in small publishers, most of which usually are unable to compete with the marketing efforts of major publishing houses.

In addition to investing money, among other measures of support being considered by the government are the provision of tax incentives to support domestic book publishers, especially the the abolition of VAT, which is currently at 10%, as well as a reduction in price of insurance premiums.

Finally, the funds will be invested in the promotion of books and reading in the country, with the aim to prevent further decline of interest in reading among Russian citizens. According to Oleg Novikov, Director-General of Eksmo, one of Russia’s top publishing houses, research has demonstrated that the number of “dedicated readers in Russia declines by 2% each year.”

At the same time some Russian analysts believe the Russian publishing business is more robust than statistics suggest.

Vladimir Solonenko, executive director of the Association of Book Publishers of Russia, said: “We are do not fully agree with the position of some domestic analysts that there is a deep crisis in the Russian book publishing industry. The situation in the market is not so bad; the decline is a global trend. In addition to bad signs, we should note that the publishing range of our producers is steadily expanding,” adding, “Of course, book publishing is not the most profitable business in Russia, but it is actively developing.”

A significant volume of the new government funds is also expected to be invested in the development of the national bookselling industry, which is in dire need of support and updates. At present Russia has an acute shortage of bookstores, with many of the existing retail store being outdated and/or located on the outskirts of cities.

According to Denis Kotov, Director-General of the Bukvoed chain, one of Russian largest chain bookshops, since as many as 20% of Russian book stores have closed since 2010 and there have been at least five high-profile bankruptcies. He predicts that over the next 1-2 years up to 200 bookstores will close.

Among the leading players in the Russian book publishing market in terms of total market presence is Olma Media Group, which had sales exceeding 63 million volumes in 2012, as well as former leading publishing houses Eksmo and AST, which saw their total sales drop by 16% and 28%, respectively, compared with 2011.

Expanding Out of Big Cities, Ebooks Still an Afterthough

Analysts of the Russian Ministry of Culture believe that the new investment funds will  significantly improve situation in the domestic book publishing industry and will possibly create conditions allowing for expansion beyond the major cities. At present Moscow and St. Petersburg account for some 70% of all the titles produced in Russia and about 90% of total sales, while the share of provincial towns is very small.

At the same time they also note the growing popularity of ebooks, which according to some calculations may account for some 30% of the total domestic book market by 2020-2022. However, so far, ebooks remain a marginal concern. According to Alexander Shipetin, head of department of children’s books and magazines of AST publishing house and the former vice-president of the Russian Book Union, currently, ebooks are estimated at no more than 0.5% of the total volume of the Russian market.

Eugene Gerden is an international freelance writer, who specializes in covering global book publishing and bookselling industry. He is the former deputy director of the department of corporate affairs for the Russian Association of Book Publishers.