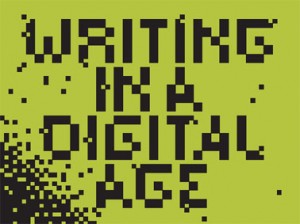 Writing in a Digital Age

LONDON: Publishers’ websites are universally awful; digital books have yet to make the leap from simply imitating their physical counterparts; self-publishing is a growing force — particular in digital; and there is a huge world of fan fiction that is almost a publishing industry in its own right. These were some of the takeaways from last week’s Writing in a Digital Age Conference, hosted by The Literary Consultancy (TLC), which wrapped up on Saturday at the Free Word Centre in north London.

Random House’s Digital Publisher Dan Franklin always shoots from the lip and didn’t disappoint. “Publishers websites are uniformly terrible and that’s an issue that is going to become urgent,” he told delegates who included fellow publisher Andrew Franklin of Profile and Stefan Tobler of And Other Stories. “When compared to sites like Vice magazine, they’re dreadful. I have concerns around publisher technology. Most publishers lack technology, or they tack it on at the end, so you have content, data, platform, technology. But I think we have to put technology at the heart.”

Reviewing the current state of the industry, he observed: “For me, the end of 2012 was ‘the end of the beginning. Our ebook backlist program was completed and digital now accounts for 23% of our revenues. A recent report from Price Waterhouse said that digital will overtake print by 2017. There’s going to be more contraction and the traditional gatekeepers already no longer stand. I think everyone is pausing and looking around now.

“But I’m worried about the future. I think there are huge issues around the world economy that will affect the book industry. I have concerns about the dynamic of the high street and the visibility of print books. Discoverability is a publisher problem. If he was cautious about the future, keynote speaker Audrey Niffenegger, best-selling author of The Time Traveler’s Wife, was optimistic. Her presence was testament to how much this conference has grown in status in just two years and her address was by turns thoughtful and eccentric. (Read our report on last year’s conference, “Going to the Very Edge of the Known Writing Universe.”)

Part rumination on typography and books as tactile objects, she believes current ebooks – or “e-machines,” she called them, since device and content are one – were “a little clunky and weird. It will be gorgeous, but right now…It’s a bit like the early printed Bibles after Gutenberg which they tried to make look like the hand-illuminated ones.”

As if to underline speed of change in the industry, she noted that as relatively recently as 2003 “there was no clause for ebooks in my contract for The Time Traveler’s Wife. So I own the e-rights and I’ve been concerned to preserve my e-virginity.”

It was her agent, Joseph Regal, who caused a re-think. In 2011 he founded Zola Books, “a single site where readers, writers, booksellers, reviewers, bloggers and publishers can gather in one place to connect naturally around the books they love.” In due course, it will begin selling ebooks too.

Niffenegger is involved and is allowing Zola to both publish her novel as an ebook, together with a 30-page extract of a sequel which will be published as a full-length novel in due course. “The idea is that ebooks could and should be better,” she said. “We think we should be participating with independent shops, rather than trying to crush them. We want to bring the community of authors and publishers together in a happy eco-system – they shouldn’t be trying to eat each other.”

Self-publishing as “Slush,” Fan Fiction on the Rise Steve Bohme of Bowker presented some of its first research into sales of self-published ebooks. In the UK, they accounted for some 12% of all ebook purchases in 2012, and more than 20% in crime, SFF, romance and humor. Publishers have been taking note of the self-publishing charts for some time now, with the lists acting as a kind of digital slush-pile and consumers performing the role of unpaid publisher readers. Dan Franklin likened it to the music business. “Just as an A&R exec’ might go to see an unsigned band, so we’re looking at these lists now. Why wouldn’t you?”

Scott Pack of HarperCollins-owned Authonomy, the site where would-be authors pitch their work which is then peer-reviewed by fellow users, cited the example of Kat French to demonstrate why publishers should – and are – taking note. “We’ve taken her on and her novel may do 4,000 to 5,000 copies. But her self-published novels have already sold 150,000 copies – in other words, in the self-publishing world, she is already more successful than she’ll be in the next two years in ‘conventional’ publishing.”

It was freelance editor Sally O-J (sic) – incidentally, Sarah Waters’ first reader of everything she writes – who revealed some details of the extraordinary world of fan fiction. “On one site alone there are 90,000 stories using the characters from Glee and 600,000 using characters from Harry Potter. There are also various sub-genres like ‘slash fiction,’ which is about gay men, that are very, very popular with women. I’m reading a very good novel set in Mexico in the 1880s at the moment, about a love affair between two soldiers. In fact, this is a piece of ‘alternate universe’ fan fiction, where the characters have been taken out of their original environment. I know there is a strong market for this out there, but I also know that if I take it to an agent they won’t know what to do with it.”

It begs the question: should publishers begin to look at this area? Will we ever see ‘fan fiction’ sections in bookshops? But then, naturally, further questions are raised. At the moment, this work is all free. How would the creators of the original characters feel if others began to make money from their efforts? “As it is, J K Rowling simply shrugged,” said O-J, “but Anne Rice was beside herself with rage and beseeched her fans not to do it.”

J D Salinger, of course, famously put his legal team to work to block US publication of Sixty Years Later Coming Through the Rye, which imagined Holden Caulfield as an old man.

Fan fiction is nothing new – Sebastian Faulks has done it with Wodehouse, William Boyd with Bond and Jean Rhys with Charlotte Bronte in Wide Sargasso Sea. “There’s no doubt there’s a huge audience for it,” said O-J. “But I think there’s an interesting debate to be had on how monetise it.”

BONUS: We look at how copyright law pertains to unauthorized sequels and fan fiction, using the Salinger case as an example.