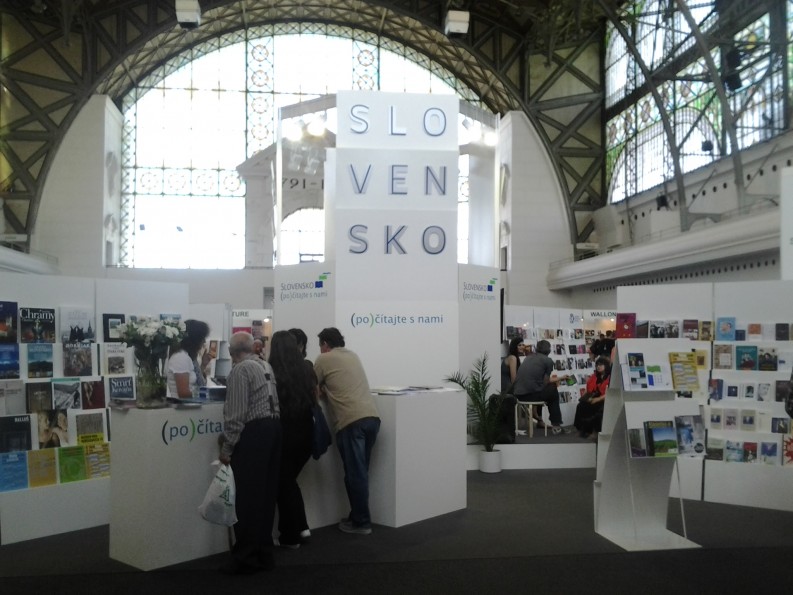 The Prague Book Fair featured Slovakia as the Guest of Honor this year.

A book fair often serves as a litmus test for the broader situation of booksellers and publishers in a country, and Book World Prague 2013 (BWP) showed an industry with signs of continued vitality, major encumbrances and more bumps in the road ahead. The opportunity to gauge the state of the Czech book business and culture was all the more pronounced in that this year’s Guest of Honor was neighboring Slovakia, with the book fair falling on the 20th anniversary of the split of Czechoslovakia into two independent countries.

Managing director of Book World Prague Dana Kalinová told Publishing Perspectives that there were doubts whether people in Prague would be interested in Slovakia as the central attraction, after having more far flung and unknown locales being featured in previous years. Recently, an increasing number of Slovak books are being translated into Czech. This would normally be taken for granted as a good sign among advocates of translated literature and cross-cultural exchange, but actually represents a phenomenon very specific to these two countries. Whereas the older generation of Czechs born and raised in Czechoslovakia are still able to understand and read Slovak, the younger generation that has grown up since the countries separated are much more typically unable to understand the closely related languages.

Having Slovakia at center stage offers a very different sort comparison as well. The VAT tax on books in the Czech Republic rose to 15% this year, a significantly higher amount than in many other European countries. This increase has proven to be an obvious focus for the woes of booksellers. Slovakia had an even higher rate, at 20%, and Kalinová cites their recent lowering of it to 10% and the subsequent rise in sales as a model for the Czech Republic to follow. Book sales in the country have been dropping dramatically – between 20-30%, and 50% in the case of textbooks. Yet Kalinová says that a fundamental interest in books, reading and writers was evident over the three days of BWP, and that in spite of skepticism book sales at the fair were better than predicted.

Not all the problems in Czech bookselling come from outside. Kalinová thinks that the market needs further consolidation: “The market is oversupplied. You can hardly keep up with all the new titles.”

Presenting Slovakia as the Guest of Honor wasn’t the only thing fair organizers felt some trepidation about in regard to public interest. The other focus of BWP was poetry, a focus which clearly wasn’t a guaranteed attention grabber. Just as people came to see the Slovak writers and buy their books the audiences for the poetry events were highly impressive.

Alexandra Büchler, director of Literature Across Frontiers (LAF), told Publishing Perspectives that having poetry in focus is something that shouldn’t even require a book fair to bring about. “Poetry is important. It’s here to stay, and I don’t think we should be discussing it in terms of its commercial value because it’s obviously not a commercial genre.” One feature Büchler stressed in both her comments as well as the some of the panels she spoke on the way poetry is presented.

On one panel Büchler presented LAF’s revamped website as well as its radically renovated online magazine Transcript, whose first issue is focused on Armenia. Together with poet Ryan Van Winkle they presented an overview of the great variety of presentation of poetry and literature in general online — from the great to the good to the headache-inducing awful. Other panels focused on poetry in translation, the importance of poetry festivals and the European subsidies that can be so useful for publishing poetry but so difficult to manage the bureaucracy.

Threats on the Horizon: Amazon

As if Czech booksellers don’t have enough problems they now have to anticipate the arrival of Amazon, which is reportedly planning to locate its Central European logistics hub in the Czech Republic later in 2013.

“I see a danger in big ebook sellers. It’s not ebooks but eshops, with their low prices and flexible logistics. It’s a real danger for small booksellers,” Kalinová says. “They talk about how many jobs they’ll provide but what kind of jobs – mostly unskilled and some IT.”

Yet there are some bright spots ahead as well, with Kalinová citing the very recent appointment of writer and publisher Martin Vopěnka as chairman of the Association of Czech Booksellers and Publishers. According to Kalinová, Vopěnka’s awareness of international trends and challenges make him particularly well-suited to the job. He has been outspoken about the Czech government’s lack of support for book culture.