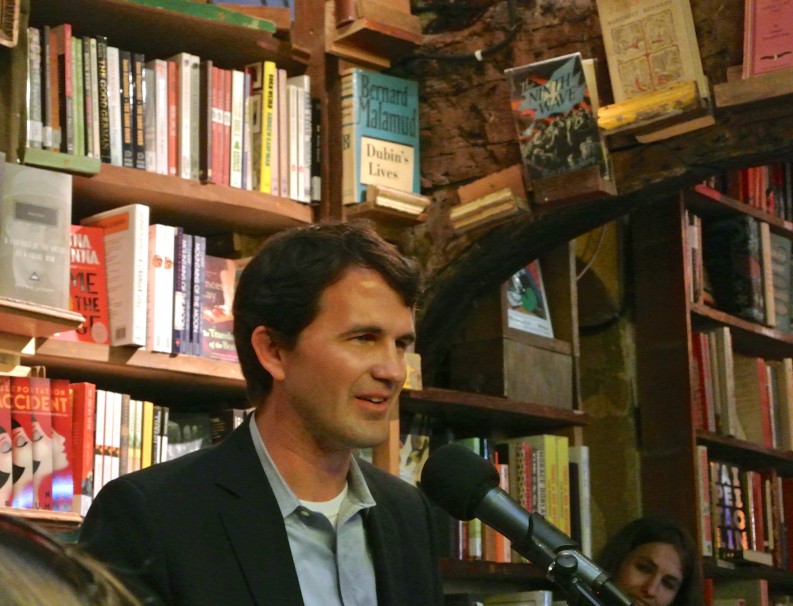 PARIS: I was lucky enough to mark this year’s Bloomsday, June 16, by holding in my hands a copy of the hefty 1936 Bodley Head edition of Ulysses. Priced at €3,000, it sat among several collectors’ editions of the text in a locked cabinet at the famous Paris bookshop Shakespeare & Company (named after the shop whose founder Sylvia Beach published James Joyce’s novel when no one else would). I was at the bookshop as one of the judges of the Shakespeare & Company 2013 Paris Literary Prize, a generous €10,000 prize awarded to a novella written in English by an unpublished author. This is only the second year the biannual prize has been been awarded, and there was a palpable sense of excitement among the organizers and attendees at the prize-giving — a sense that the prize was achieving its aim of helping unknown writers find an audience.

Shakespeare & Company is now run by another Sylvia, who inherited the shop from her father, George Whitman. An American who came to Paris in 1945, his Harvard education cut short by the war, Whitman was a book obsessive who emulated Sylvia Beach by turning his shop into a place where writers could hang out. He allowed people to sleep among the bookshelves if they needed a bed, and hosted readings and intense conversation. An early advertisement for the bookshop (when it was called Mistral) cites Max Ernst as saying: “Continues the tradition of the Paris book-salon.” It is impressive to see how that tradition persists under Sylvia Whitman. Young aspiring writers, and more established ones, flow in and out of the shop as they always have done — and it is this that attracted Clydette and Charles de Groot of The de Groot Foundation when they wished to fund a literary prize.

The collaboration between The de Groot Foundation and Shakespeare & Company has created a rather special thing. Not funded by a public body, or for advertising purposes, the prize feels remarkably human and altruistic in its agenda. What is more, the requirement to submit a novella rather than a short story tests those who enter in an interesting way. An overly long short story or curtailed novel won’t wash. The writer needs to have a sophisticated understanding of form to get a novella right. That was what struck me about the winner, C.E. Smith. His novella Body Electric couldn’t have been shorter or longer. It filled the space perfectly. His central character gets caught up in an inexorable fall from grace that needs 30,000 words to convey with subtlety, but would have felt like a lecture in a full-length novel.

The other appealing aspect of the prize is that anyone from anywhere in the world can enter, provided they write in English. The judges read the entries without names attached. I played a game with myself as I made my way through the shortlist, trying to guess where each entrant was from and what literary tradition they were imbued with. I was only partly right in the case of one of the runners up, Svetlana Lavochkina. I knew she wasn’t a native English speaker and I suspected a great familiarity with Russian literature, but I also thought she might be a man. It didn’t cross my mind that she might never have lived in an English-speaking country. Svetlana was born in the Ukraine and moved to Leipzig aged twenty-six. The quality of her English comes from sheer passion for the language. As for the other runner up: Tessa Brown’s wonderfully demotic Sorry for Partying was full of Hispanic American slang and references to Occupy Wall Street, so I guessed where the author was based, but not her ethnicity. A Renaissance of Shorter Fiction Forms

One of my first publishing jobs was as a junior editor at Chatto & Windus. I remember enthusiastically suggesting that the imprint launch a series of novellas. I was reading a lot of European fiction that was too short to publish as a standalone books, and I thought it might help to put such texts together in a collection. My colleagues laughed at my naivety. When I did get to publish a novella in translation, Afghan writer Atiq Rahimi’s Earth and Ashes, I saw the problem. It’s hard to get readers to part with £12.99 for a slim book, the width of whose spine means it gets lost on the shelves.

Kindle Singles may, of course, solve all this. Barely a day goes by without some article being written about the renaissance of short fiction, and the opportunities for those who write it to self-publish digitally. But it struck me, as I sat listening to the three prize-winners read at Shakespeare & Company on Sunday night, how important it is for a writer to feel part of a physical community. For the winner C.E. Smith, it was the first time he had read his work in public, despite the fact that he has been writing for years in parallel with his medical career. He could have posted his novella online and engaged in virtual dialogue with his readers, but would it have been the same as standing in a room once frequented by Lawrence Durrell, Anais Nin or William Burroughs, and talking to people about his work?

All About the Alienation of Modernity

When I worked briefly at Shakespeare & Company, aged 18, I was terrified of George Whitman who, as his daughter readily admits, liked to test people to see if their minds were fit to grace his shop. But the fear came from knowing how high the bar was set, and being inspired to reach it. In a virtual community, it is a temptation to click the ‘x’ button on things that make you feel inadequate, rather than trying to measure up. And with the ease of virtual communication comes the danger of alienation — the loss of the intimate and the humane. Perhaps significantly, all three of the winning novellas were, in part, about the alienation of modernity. C.E. Smith writes of Reality TV invading an American morgue. Tessa Brown’s story concerned creative teachers being fired from Chicago schools in favour of those who toe the line. Svetlana Lavochkina’s exuberant Dam Duchess is about the inhumanity of a Stalinist dam-building project.

It seems appropriate that these stories of dislocation were celebrated in a bookshop whose name is, forever, allied with the great novel of modernism. A cruel eye could look at the Shakespeare & Company crowd and say that it was a little too retro. But rubbing shoulders with the writers of the past is a crucial part of forging the new, as Ulysses with its mixture of myth and newspapers tells us. The internet alerted the three writers to this prize; winning it brought them to Paris. All writers now face the challenge of reconciling the virtual and the physical, and, in these confusing times, suggesting ways to think about what is lost and gained by each.