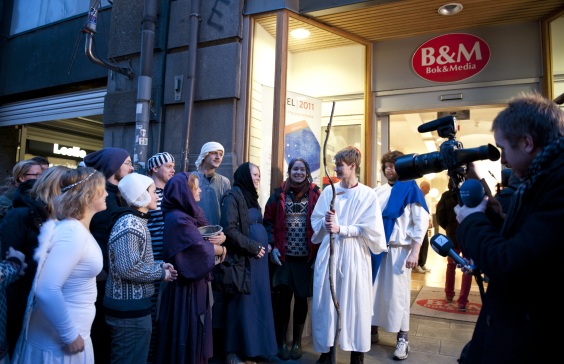 Fact: Norway is one of the most secular nations in Europe.
Fact: Only 1% of Norway’s 5 million residents attends church on a regular basis.
Fact: In 2012, and still this year, the best selling book in Norway is the Bible.

According to the AP (via HuffPo), The Bible, in a new Norwegian language version, has even outsold Fifty Shades of Grey (thank God!) to become Norway’s best-selling book.

The new translation was released in October 2011 by the Norwegian Bible Society, replacing a 1978 edition, in an attempt to improve both readability and accuracy. For example, the AP reports, “In the older version, Mary was called a ‘virgin.’ In the new translation she is referred to instead as a ‘young’ woman. The U.S. Conference of Catholic Bishops also made this change in the latest Bible translation from 2011, saying the change didn’t alter teaching about Mary, but was meant to address the possible different meanings of the Hebrew word ‘almah’ in the text.” (Editor’s Note: Hmmm…seems like a rather serious distinction to me, though it makes sense if “young” implies her not having menstruated yet?)

Dag Smemo, project manager for the Norwegian Bible Society, told the Guardian that, “It’s always a very touchy issue, doing a new translation of the Bible.” He continued: “People say they like it the way it is. But we had a very thorough procedure, involving authors and poets, secular people and believers, and discussing the whole translation word by word, so there is not only a good translation of the Greek and Hebrew but also a very good flow of the Norwegian language. People are saying that it’s very good, and we are seeing this from both conservative groups and more secular groups. It’s definitely not only Christians buying it. It’s atheists too — people are saying the Bible is important for us, for our culture, and for the nation.” But it takes more than a new translation to make the Bible fly off bookstore shelves: it takes marketing.

Norway’s Bible Society made the decision to promote the new translation like it was a pop fiction novel, “stirring anticipation by giving out teasers of biblical stories before its release.”

Poets and authors, including Karl Ove Knausgaard (author of A Death in the Family: My Struggle Book One), Jon Fosse, and Hanne Ørstavik were brought in to help with the translation and to “make the text sing for a new generation.” Packaging was used to target specific groups: teenagers with pink leather or denim covers, adults with bridal or sophisticated literary covers.

Plus, “It’s easier to read,” Helga Haugland Byfuglien, presiding bishop for the Church of Norway, said. “There is no over-interpretation of the text.”

The AP report points out that scholars in Norway aren’t particularly surprised by the success of the new translation, explaining that “faith is a deeply personal matter to this nation of taciturn Scandinavians who regularly withdraw from city life to spend holidays at remote cottages in the solitude of the mountains, fjords, and forests.”

“Church attendance is a poor measure of the Norwegian state of faith, said post-doctoral fellow Thorgeir Kolshus at the University of Oslo. “Religion is a very private thing for Norwegians.”