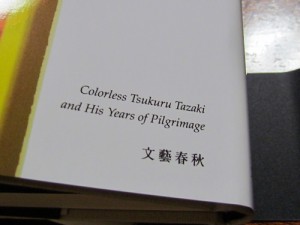 Colorless Tsukuru Tazaki and His Years of Pilgrimage

On May 6, we wrote about the battle raging in South Korea over the rights to Haruki Murakami’s latest novel, Colorless Tsukuru Tazaki and His Years of Pilgrimage. And now, a victor has been announced.

The Minumsa Publishing Group has proclaimed itself the winner, and according to publishing insiders quoted in the Korea Times, paid at least 150 million yen (around $1.49 million) for the honor, which would be the highest royalty payment ever paid by a Korean publisher to a foreign author.

The Times goes on to explain that “In a country where book readership is hitting new lows amid a bad economy and the explosion of mobile Internet devices, Murakami is one of the few writers capable of moving a large volume of hard copies and paperbacks.”

Indeed, Murakami is so popular in Korea, where his previous novel, 1Q84, sold more than 2 million copies that the people in the publishing industry talks about a “Haruki Syndrome.”