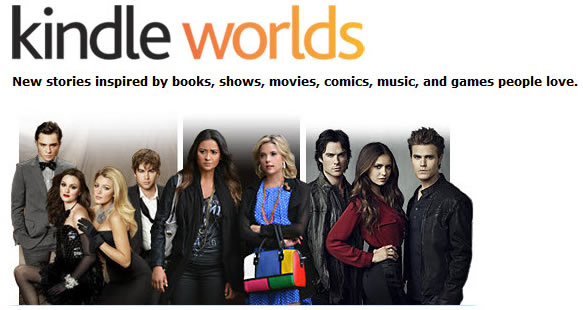 Despite Kindle World’s seemingly revolutionary legitimization of fanfiction, the venture appears to be a traditional publishing model in one crucial respect. Kindle Worlds and the form of the ebook itself fulfills a gatekeeper role for the World licensors, rather than being also an online vehicle for writing, reading and building community for the fans, which is what one might have expected of a fanfiction-based publishing venture.

The fact that Amazon has called it ‘Kindle’ rather than ‘Amazon’ Worlds clearly defines Kindle Worlds as an ebook venture, tied to the Kindle reading device/app. Amazon does not appear to have adopted nor explored the basic underlying interactive, dynamic mode of storytelling that is at the heart of fanfiction which, crucially, begins and lives online.

Amazon’s focus on ebooks might not matter particularly for a traditional publishing venture (although I think all publishers today should be at least thinking about establish online communities), but Kindle Worlds is attempting to attract the fan communities, who not only write, but also interact and read, online. The huge online, and increasingly mobile-friendly, writing platforms like Wattpad, LiveJournal, fanfiction.net, etc draw millions of unique views, as shown on this infographic of Wattpad’s fanfiction uploads. This is where young people, in particular, are writing and reading; perhaps books, whether ebooks or print, increasingly belong to an older demographic.

These online writing sites, even the most basic, enable and enhance one of the most important aspects of a fandom: the sense of belonging, of community, created through the opportunities for immediate and direct interaction and feedback with readers and followers. An ebook, in contrast, provides limited means for community and interaction, except by proxy through sites such as GoodReads, which Amazon has of course recently acquired. The online format also provides the means for writers to include all sorts of external pop and culture references, and hyperlinks, which can be managed by even an amateur techie. In this respect too, the web still trumps ebooks.

So if being online is so important to fanfiction, why has Amazon not adopted this central mechanism which could have drawn millions of views to its own online site? One reason may simply be that they are relying on sites like Wattpad to generate the traffic to Kindle Worlds. The other may have to do with content control. The plural “Worlds” in Kindle Worlds marks a clear separation between the different fanbases; there will be no boundary crossing here. For fanfiction, boundary crossing of various types is the point. Trying to constrain the unconstrainable is an inherent paradox in a model based on content control. Of course, one way to attempt to control content/text is to contain it in a book rather than have it online where control is always subject to slippage. However, the existence of Fanfiction itself undermines this attempt. Amazon and the licensors have a difficult balancing act. Most licensors would want to retain control over the content that appears online and therefore restrict official content, whether it be original or fan-generated, to their own fan sites; it might indeed be very difficult to keep the licensed Worlds separate in one online environment.

So one could argue that the “form” of the ebook in this case, where online would normally be the “native” medium, answers primarily the needs of the licensors rather than those of the fans and readers. This is not to say that Kindle Worlds shouldn’t have ebooks; even in the fanfiction communities, people create ebooks of fanfics for free download. It is the fact that Kindle Worlds appears to be only about ebooks that is the issue in the context of fanfiction.

So if the online platform is not offered, how appealing will Kindle Worlds be to fanfiction writers? The “fan fiction” in the context of Kindle Worlds is something of a misnomer, as Kindle Worlds is more about carefully managed “tie-in” novels than it is about the free-ranging, unconstrained desires and narratives of fanfiction. The content restrictions alone are likely to prove a barrier. The “no pornography” rule is the most obvious. Does this ban include the erotica that is prevalent in much of fanfiction? Would Fifty Shades of Grey have been turned down? I’ve seen reference elsewhere that this would have passed the test, which seems rather odd. Perhaps the ban on pornography is just a strategy to appease the license holders.

Fanfiction writers are perceived by many to have no rights over their fanfic stories (although there is an argument for ‘fair use’ (see this interview with Rebecca Tushnet, a legal advocate for the Organization for Transformative Works), and thus there is an assumption that they will leap at the chance to earn 35% royalties, even if they sign away all rights beyond basic copyright. However, fanfiction and fan culture have a long history of being communal, supportive and importantly a gift to readers, and decidedly not a commercial venture, so the lure of payment undermines something that is deemed very important in the fanfiction community. This may well mark a turning point though for the fanfic writing community, with the younger demographic of writers on Tumblr and Wattpad perhaps embracing such a venture, seeing it as both a form of revenue, and as a self-marketing vehicle used perhaps to attract big advances from “real” publishers.

As for the readers of the Kindle World novels, these are unlikely to be the died-in-the wool fanfiction readers, who can, and probably will continue to, read fanfiction for free on the fanfiction sites, where content is not restricted, and boundaries are not set. If Amazon fulfils the role of the traditional publisher in terms of editorial assessment, that might increase its appeal to fanfiction readers. However, it still not clear how much editorial work Amazon will do, and whether indeed there will be a distinction made between the commissioned and the self-published works. Secondly, there are already curated lists on the fanfic sites, with Top Ten lists in various genres, writing competitions etc (The Archive of our Own has recently been nominated as one of TIME Magazine’s Top 50 websites in 2013 for its ease of use, and excellent curation of fanfiction.)

The target market then may instead be the “average” fan of shows and books rather than those already participating in the online fanfiction world. The ‘traditional’ approach focusing on ebooks may be the right model then by legitimizing and removing the stigma of fanfiction in the eyes of the reading public. Will these readers want to read and pay for this content? That remains to be seen.

In not embracing the online nature of fanfiction though, or not as far as one can tell yet, Amazon has perhaps ‘missed’ potentially its greatest opportunity. There may yet be room for other publishing ventures that align more closely with the culture and purpose of fanfiction, and fan production and culture generally. The most difficult step may be to convince content owners that fans can be welcomed and accommodated as producers, not just passive recipients of content; that they can be partners not threats. And that having content online is essential. That may take some courage.