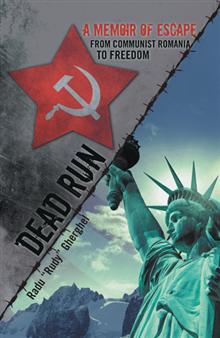 Inspector Paws and the Wonders of Europe, by Rosemary Budd
This mystery introduces a wise and wisecracking cat called “Inspector Paws” who is just snuggling in with owners Stella and Ernie when the latter dies of a heart attack. Paws smells foul play and is determined to get to the truth, even as Stella and her friend Jo whisk him off on a bus tour of Europe. Paws’ spunk and personality easily carry the story as it careens all over Europe and holds its own and then some in the cat caper tradition. Read review.

The Partisan by William Jarvis
This tense, gripping tale of World War II-era Slovakia revolves around two brothers and their different responses to Nazi domination — Patrik fleeing to join the partisan rebellion, Stefan struggling to keep the family textile mill running. Ultimately pondering the timeless question of what makes a hero, this is exciting, well-written fiction with a moral backbone. Read review. Dead Run: A Memoir of Escape from Communist Romania to Freedom, by Radu “Rudy” Gherghel
Using a ghostwriter, Gherghel tells an engrossing tale of his youth in Romania under Soviet rule beginning in 1944 and his dangerous escape to Europe and eventually the United States. This is a visceral, edge-of-the-seat reading experience with an author who feel so authentic, readers can’t help but wonder what they would do in his situation. Read review.

Reinvent the Heal: A Philosophy for the Reform of Medical Practice, by James T. Hansen, MD
Believing that the disintegration of U.S. health care is at hand, gastroenterologist Hansen points to two causes: lack of physician empathy and the overuse of high technology. His book, replete with anecdotes from his own experiences, offers lyrical writing and cogent reasoning for reform. Read review.

These books did not receive Stars but were highly praised by our critics:

The Organ Donor, by Cory Jason Wright
A serial killer who is taunting police with body parts – such as sending them a pair of eyes floating in formaldehyde with the note “I’ve had my eyes on you” – becomes the subject of an increasingly desperate search as it becomes clear that police are being targeted as victims. The story brims with life and spirit equal to the works of Jonathan Kellerman and Stephen White. Read review.

Shadows Over Sheradan, by Scott Barker
Blending elements of adventure fantasy and science fiction, Barker weaves a tale set in a distant world involving Prince Trigarius’ struggle against his former queen, who is reviving a race that consumes victims’ souls before turning them into their own shadowy kind. With fully realized and memorable characters, remarkable world building and a briskly paced and engaging storyline, this debut could be the first installment of an extraordinary fantasy saga. Read review.

Better Managers Do Better Business, by Orrie Baragwanath
A lecturer, business owner and management consultant based in South Africa, the author offers advice to managers and would-be managers in the form of letters to his son, who has a master’s degree in business management. The book discusses various kinds of managers and offers helpful, detailed information on such topics as delegation, participative management and motivation. The volume is clear, well-organized, and replete with practical checklists and nuggets of wisdom. Read review.

Broken Promises: Whatever Happened to Vatican Council II, by Finbarr M. Corr
Ordained when he arrived at his first parish in New Jersey in 1960, Corr lived through the changes wrought by Vatican II. Here, he argues that the reforms of the Council have been left unfinished and that the abuse scandals around the world are a result of closed and secretive church leadership. Professionally written in a straightforward and honest voice, the book is a passionate summary of the church reform movement and a blueprint for the work that remains. Read review.

Help!!! I Have a Property Insurance Claim, by Karl Hechavarria
Do you know the difference between “betterment” and “improvement”? Do you know that some insurance policies distinguish between damage caused by “wind” and a “windstorm”? After insurance pays out, do you know who owns any recovered stolen property? Hechavarria answers these questions and more in this slim, information-packed volume that educates readers about what insurance policies do and do not cover, what to expect when you file a claim and your obligations under an insurance contract. Read review.

I Livia: the Counterfeit Criminal, by Mary Mudd
A comprehensive study of Livia Drusilla, the favorite wife of Caesar Augustus, the book eschews the popular notion that Livia was an evil, scheming woman who plotted against her husband’s descendants who stood in the way of her son’s ascension to power. A fascinating and accessible work of biography and historiography. Read review.

Mommy Couldn’t Find Her Eyelashes: Forty-Four Years in First Grade, by Mary Jane Fizer
A quick and funny read, this book offers anecdotes and quotes from the elementary school students Fizer encountered during her 44 years teaching first grade. An itchy scalp is “head lights”; a turkey can take 3 minutes to cook, and the teacher is called an “old lady” even by the students who adore her. These favorite moments of kiddie wisdom will resonate with teachers and parents of young children, alike. Read review.