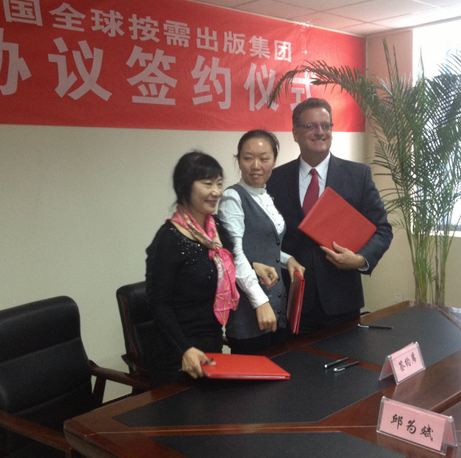 What’s black and white and read all over? Apparently, it’s English content in China — not English books translated into Chinese, but rather the English books themselves, in both ebook and physical format. In China, most children are mandated to learn English from kindergarten, and subsequently their parents are starving for books to give to them that will offer a leg up. Of particular demand across the board are children’s titles and business success stories.

Mr. Bob Song (his American name), who has worked in the Chinese publishing business for 13 years, and has partnered with Robert Fletcher of Publishing On Demand Global (PODG), to facilitate the rights and distribution of English content into China. Song and Fletcher are tight — and spoke about the Chinese publishing market as part of the professional presentations at BookExpo America last week. According to Song, Fletcher spent 100 days of last year in the country, helping to set up relationships with what now stands to be 580 Chinese State publishers, 1,000 private publishers, and all several bookstores, including Jingdong.com, “one of the top 3 online bookstores in China,” according to Song (and profiled in April in our story “Jingdong Battles Dangdang, Amazon for China’s Online Book Buyers”). “I had to leave out with my family and go with this guy everyplace.” Song also came to the United States and “bought a house next to his [pointing to Fletcher].” Business is booming! Fletcher’s company was launched in China last year as the Beijing United Glory and Culture Media Company.

Getting to Know China

“I think China is the #1 publishing market in the world,” said Song from the Middle Stage at BEA13 to an unfortunately anemic audience of roughly 15-20 people. Here’s how he breaks it down: China has a population of 1.4 billion people, and is turning out millions of new English speakers every year (the numbers vary greatly, but it’s safe to say it’s many hundreds of thousands, and some say even more people in China now speak English than in India). As the proverbial saying goes: if everyone buys just one book, that’s an astonishing number. The biography of Steve Jobs sold five million copies in China in 2012, a combination of physical and digital copies (and likely even more once you include pirated copies).

In his presentation, Song outlined several recommendations for those who wish to walk the Silk Road to do business. If you’re going to do business with China, you must respect China, study its culture, and respect their government. “In our culture, a relationship is everything,” Song said. “You must build a relationship with the client, and set up a local team by getting the right partner.” Also, it’s important to know that negotiations take more time than you might be used to. “New York Times bestsellers are good, but I can communicate other titles to publishers as well. In the beginning, one company said they were going to buy 60 titles, but after one year they’d only bought 5.” Ergo, be patient, he warned. There is a silver lining, eventually. Despite the lengthy process, “many China publishers would import at least 30% new copyrights every year.”

Following his presentation, someone from the audience asked a question about copyright laws in China—how do they work? Is it a Federal law, as ours is here? “In China we set up many laws to protect your copyright. If someone steals your copyright, that damages us. Nobody knows how to do this [sic] so maybe we can have you trust our government and our law. China’s law may not be perfect, but we improve each year.”

If you want to self publish in China, Song explained that you’d purchase an ISBN number from a state publisher in China, and you’d “be covered” by them and give your content to them. (Though, as described in today’s feature story, this too can cause issues).

To see how simple the process of working with Beijing United Glory and Culture Media Company might be, I decided to brainstorm and pitch a book through their online system aimed toward authors. I called my potential project “Weekends in Chinatown.” Hmm… it would be a collection of Instagram photos with “engaging captions illustrating how the neighborhood intersects with its culture” or something along those lines. After I submitted my initial 75-word pitch (and no more, please), I got an auto response from Publishing On Demand India saying that my pitch would be reviewed by Publishing On Demand China shortly.