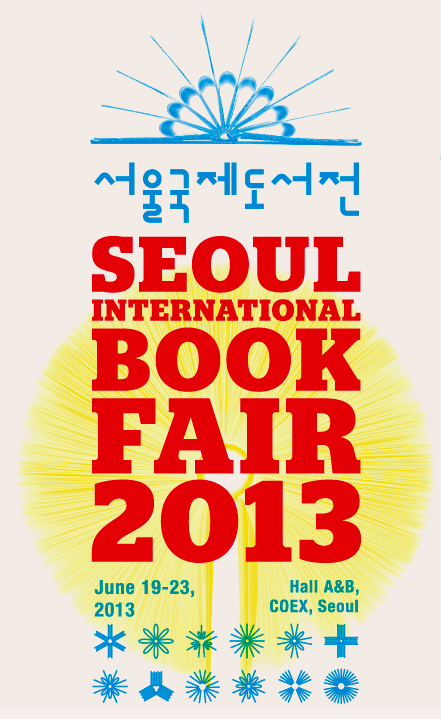 The Seoul International Book Fair serves as a marketplace for the public, as well as a fair for professionals.

It’s a hot, sticky affair wandering the aisles of the Seoul International Book Fair (SIBF), which was opened by South Korea’s new President Park Geun-hye last Wednesday and wrapped up yesterday. Following a series of corruption scandals involving faked safety certificates, two nuclear reactors have been shut down in the country,  and to prevent power black-outs the government has introduced what might be termed “AC legislation” to ease power consumption. All public buildings have to operate at 28 degrees Celsius, rather than the normal 22, which means that one of the most popular giveaways on the stands at the exhibition centre were branded fans.

It’s a very North Korea-sounding situation for this most technologically advanced of nations where even the spotless subway system offers wifi and everywhere you go people are tapping and pinching and scrolling on the latest smart device from indigenous industry leaders Samsung. See that baby’s rattle in the push chair? That’s probably 4G too.

Ironically, the very success of such smartphones and ‘phablets,’ which have been developed, of course, by one of the most successful Korean companies ever, is also cited as one of the reasons for the decline in the book market. Up and down the aisles, people will tell you that everyone — particularly the young — is reading less. Yet the booths are crowded, perhaps because, as in book fairs in, for example the Middle East, the SIBF also acts as a giant bookstore, offering bigger discounts than the bricks and mortar stores.

But Seung Hyun Moon, Director, International Project Department at the Korean Publishers Association, still says “the market is getting worse. Publishers are facing a problem from smart devices. Almost everyone says that in the past you would see people reading books on the subway. Now you see them catching up on soaps they have missed.”

Surely they could consume published content too? “Korean publishers are very conservative,” he responds. “They are scared of ebooks. They witnessed the collapse of the music industry and they are reluctant to give content because they think it can be easily pirated. There is a law for everyone to make a legal deposit of ebooks to the Korean National Library, but publishers are reluctant to do that.” Agent Joseph Lee is working to capitalize on the popularity of Korean culture abroad.

Yet there is happier news too, as the market for Korean books is growing overseas. Literary agent Joseph Lee of KL Management notes that titles such as the Man Asian-winning Please Look After Mother by Kyung-Sook Shin are well-known abroad; less so, perhaps, is the YA cross-over title Leafie that his colleague in New York, Barbara Zitwar, sold to Penguin US. A life and death fable about a chicken, it can be read on many levels. Lee describes it as “an almost perfect masterpiece. You can compare it to Charlotte’s Web. It’s a book that has so many universal themes — the natural order, life and death, parents and children.”

A bestseller in Korea, Lee has now sold the title to 14 countries, including China, Japan, France and Hungary. “I think Korean writers have to look outward more now. I tell my authors that their readers are everywhere, that literature is a universal art for everyone to enjoy. And we have to sell abroad because the Korean market is too small.”

Korea as an Engine of Cultural Exports

The President’s presence at the fair this year was widely seen as significant. She last visited the fair at the end of the 1970s when the “miracle on the Han” (the mighty river that bisects the city) was just beginning. This is the term used for Seoul’s huge growth, and the whole country’s modernisation and industrialisation.

Seoul continues to have a key role in the “Hallyu,” the so-called Korean wave that has seen the successful exportation music, film, TV shows and games. President Park is keen to encourage this ‘soft power,’ the most famous example, of course, being K-Pop, exemplified by the singer Psy, whose Gangnam style — named after the area of Seoul in which the book fair takes place — has been viewed more than a billion times on You Tube.

Korean publishers saw the new President’s tour of the fair this year as testament to the importance she now places on the country’s creative economy. “It’s a very positive message,” said Lee. “President Park is interested in the promotion of Korean culture. “The Korean wave can now include K-Lit as well as K-Pop.”