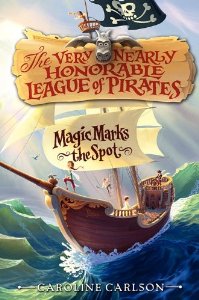 Last week at BookExpo America, editors from five different publishing houses were walking on air over their upcoming buzz-worthy Middle Grade titles. I expected the panel to be, at least in part, a conversation about the state of the industry insofar as that demographic is concerned, but no such luck. Instead, it was a veritable celebration of five different books whose authors weren’t asked to speak.

Do you remember how strange the Oscars seemed after last years’ winner was forced to come on stage and directly address the performances of the latest nominees? Mildly embarrassing, but still you can’t turn away? Matthew Ward, author of the The Fantastic Family Whipple book, was given a sparkling introduction by his editor Gillian Levinson, but he wasn’t offered a chance to riff on his own creation. He’d even had a second baby the previous Friday and obviously took pains to make it to the event, but was siphoned off to a separate half-hour on the Midtown stage for writers, and to the autograph booth. I do wish he, and the other authors, could have said a few words…

Still, it’s safe to say this crop of books is getting ready to brandish their upcoming badges of honor. Bring out the chocolate milk, yo, it’s time to celebrate. For full disclosure, I have a 10-year-old son who’s sliding very quickly toward the end of Harry Potter 7, so I had a particular interest in finding out what’s next down the pike: Ms. Markiel has worked as a children’s book editor for 40 years at HarperCollins, and has the pleasure of working on all things Narnia-related. “I don’t like what I do… I love what I do,” she said.  In this case, Markiel fell head over heels in love with the title and the heroine of Carlson’s book, which looks to be the first of a series. “This manuscript got me hook line and sinker on the first page.”

“This is a novel that touches you to the core, and makes you love people more than you already do. It’s an outsider story. Everyone that you meet has the potential to be loveable.” “I literally remember when this manuscript hit my inbox,” said Levinson.

The Family Whipple has broke more world records than any other family on Earth. Our protagonist hasn’t won a record yet (though his 12 brothers and sisters have).

“This book is about the literary descendents of MacGyver television show. The kids are always down in basement building things, old school-style. It includes illustrated how to instructions with blueprints and schematics. Great rainy day activities; a great way to introduce kids to fundamentals of science and engineering.”

The Time Fetch, by Amy Herrick

“I read this book during a horrible acquisitions dry spell, and time almost seemed to stand still for me. I’m not much of a bedtime reader, but I finished 70,000 words in one night, and then went and read it again.”

This is a fast paced adventure. There’s this rock called a Time Fetch that sends out foragers to pluck up bits of wasted time; it’s up to 3 quirky middle school kids to save the space/time continuum before the solstice arrives. “In The Time Fetch, Herrick does for Prospect Park in Brooklyn what Konisburg did for the Met in The Mixed Up Files of Mrs. Basil E. Frankweiler,” says Howard.