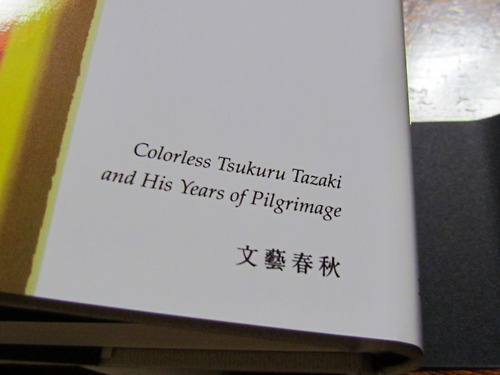 The Korea Times reports that South Korea’s major publishers are involved in an all-out bidding war to win the rights to publish the newest novel by Haruki Murakami; one of the few authors whose name sells books in a country with a declining readership. Murakami’s new novel, Colorless Tsukuru Tazaki and His Years of Pilgrimage, sold more than a million copies in Japan in just the first six days of its release. And according to the Korea Times, “Murakami’s books have always sold well in Korea, where publishers are chasing ‘Colorless’ like a pack of starving dogs fighting over a piece of steak.”

Among the bidders are major publishing houses such as Gimm-Young Publishers, Minumsa Publishing Group, Munhak Sasang, and Munhakdogne Publishing, which sold more than 2 million copies of Murakmai’s previous novel 1Q84.

The decision will be announced by the Japanese copyright holders on May 20, with an anticipated publication date in July. No one is certain just how large a check the winning publisher will be paying out to secure the rights, but it is said that one Korean publisher offered 100 million yen ($1.03 million) in advance royalty payments to Murakami for the right to publish 1Q84 three years ago, but that it wasn’t enough to win.

Interesting numbers, given a recent report from the Korean Publishers Association. Last year, 39,767 new titles were published in South Korea, with a total print run of 87.97 million copies; the first time since 2000 that fewer than 100 million new books were published over the course of a year. In addition, government figures show that the “average over-20-year-old Korean read 9.9 books in 2011, compared to Japanese readers who read about 40 that year.”

At the same time though, Wochi Kochi magazine reports that Japanese literature has become increasingly popular in Japan. In 2010, literature in translation made up 28.3% of books published. (Compare that to Japan, where less than 8% of the literature published was translated.) And of those, Japan ranked first in the number of translated titles — 832 total, making up 35.8%, far ahead of #2 United States (21.4%), the U.K. (12.5%) and France — meaning that Japanese books accounted for 10.2% of all literature published in South Korea in 2010.)

Why the increase in popularity? An article in Wochi Kochi by Akira Tateno offered several possible answers:

One reason is that Koreans have become more familiar with Japan after recent major events, such as the Seoul Olympics in 1988, the co-hosting of the 2002 FIFA World Cup by Japan and South Korea, the opening of Japanese culture under Kim Dae-Jung’s administration (1998-2003), and the increase in Korean tourists to Japan as a result of the policy. But behind all this is the fact that South Korean society has gone through a drastic change. Its shift from military dictatorship to citizen-oriented democracy freed the country from various regulations and allowed the people to start focusing on individual rights, accepting different lifestyles, and recognizing each other’s identity.

Japan has a longer history in such a way of life, which motivates the Korean people to read Japanese literature and learn more about Japanese feelings and lifestyles. In this sense – Japanese novels…are known for their rich form of written expression. The themes and writing methods are vivid and varies, making the novels irresistible. Someone once said to me that Japanese literature is refreshing because the story unfolds from a certain individual’s perspective.

Read the entire Wochi Kochi article, including the reasons why the South Korean love for Japanese literature is a one-sided affair.