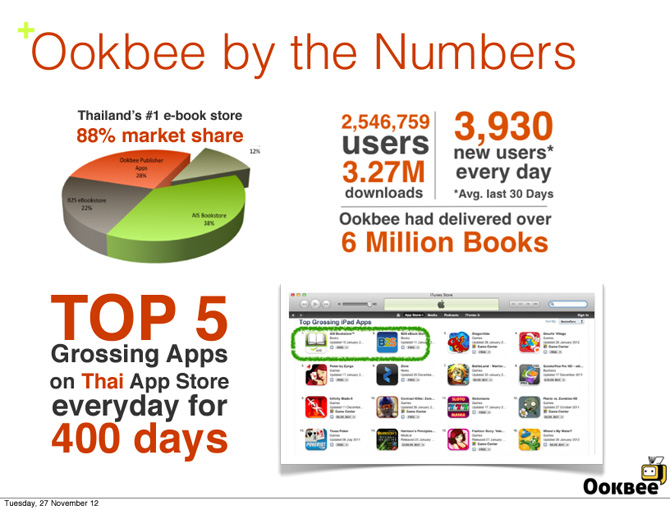 Ebook adoption in Asia varies wildly across the region and it looks, unlike in the West, growth is going to be based on mobile, rather than ereader-based, adoption.

Recent reports from Korea, Vietnam, Thailand and Indonesia indicate growth in indigenous ebook development and dealmaking across the region.

In Korea, according to Taurus Investment & Securities Co., the size of the Korean market for ebooks should hit 583 billion won ($519.8 million) in 2013, this is compared to 325 billion won for 2012. That’s an 80% increase over the previous year. Why? “The demand for ebooks will continue to increase in the future due to the availability of mobile devices sized 5-inches and above, which makes electronic contents more readable,” says Taurus’ Kim Ji-hyo. Credit indigenous device-maker Samsung for inspiring this change.

In Vietnam, where publishers are still concerned about piracy, few books have been converted and the market remains stagnant. This, suggest writer Anh-Minh Do at TechinAsia is a chicken or the egg situation. “There are just no e-readers around. In all the local electronics stores, they’re ridiculously hard to find. Merchants don’t think customers don’t want e-readers and customers aren’t buying them. Not to mention, tablets aren’t showing as much aggressive growth as smartphones are.”

This smartphone growth in Vietnam has enabled companies like Wattpad to develop a large user base in Vietnam, relatively speaking, compared with other indigenous companies such as local ebooksellers Alezaa and Sachweb.

In nearby Thailand, ebook startup Ookbee, founded in 2010, has attracted nearly three million users and dominates the market, having taken an 88% market share. And the company is expanding, having set up offices in Vietnam and Malaysia and partnered with Indonesia’s Scoop ebookstore last October.

Scoop, for its part, has recently launched an exclusive ebookstore with Grammedia, one of Indonesia’s top publishers, and is offering 10,000 titles. Scoop, while still small, has “hit 500,000 downloads, with 85 percent of revenue from iOS and the rest from Android,” according to CEO Willson Cuaca.

In conversation with TechinAsia, he added: “We expect the web store will contribute significantly and 2013 will be Android year in Indonesia.”

However, despite this strong growth, in four countries ebook sales remain less than 2% of the local book market.