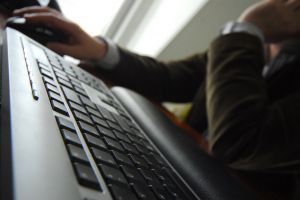 You’ve heard it before: give enough monkeys keyboards and enough time and they’ll eventually produce the works of Shakespeare. The hypothesis is called the “infinite monkey theorem.” In 2011, Jesse Anderson, a computer developer in Nevada, even claimed to have conducted an experiment which resulted in “virtual monkeys” producing a passage from the Bard. (But many found the writing less than inspiring).

In today’s feature story, “Big Data and MOOCs Herald Change for Academic Publishers,” Dennis Gannon, Director of Cloud Research Strategy at Microsoft Research, envisions a time when a machine could generate an article abstract from a scientific paper, improving on the abstracts which are currently author-generated.

It’s not exactly Shakespeare; instead its more like metadata.

Having computers produce abstracts of academic and scientific papers is one thing, but what about, say, having computers write flap copy on a trade book?

It’s not too far fetched. Already, you see internet “content” and blogs being produced with algorithms in mind; in fact, who doesn’t get a dozen spam emails a day from a far-flung SEO optimization company promising to amp up your page views and readership?

And software exists that promises to, literally, write for you. Narrative Science, which has been around since 2011, promises to generate articles from your data.

Meanwhile, programs like NewNovelist purport to assist writers in developing plots and sketching out their fiction.

So tell us, how soon will it be before we rely on computers to write for us? Is this something you look forward to? Something you can trust? Have you experience using any of the aforementioned services or others? Share your thoughts with us in the comments.