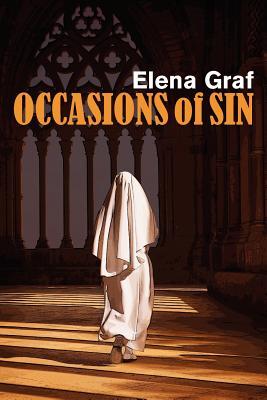 Occasions of Sin by Elena Graf: Impressive and complex, this short novel set in a convent in 1931 Germany revolves around two nuns who find themselves increasingly drawn to one another in a forbidden attraction. Family secrets, homosexuality, abortion and religious institutions all clash in this story, framed in the author’s pinpoint-sharp and adroit writing that is sure to attract a wide readership. Read review.

Shadows and Wings by Niki Tulk: Shortlisted for Australia’s CAL Scribe Fiction Prize, this impressive debut novel features Aussie heroine Lara Davies, whose life changes when her beloved immigrant grandfather dies and she finds an enameled Nazi SS lapel pin among the dead man’s keepsakes. The story flashes back to her grandfather’s early life in the 1930s, then forward to 1995, when Lara uncovers hard truths and must confront a demon of inherited guilt in herself. Based on a disturbing childhood conversation, the story reveals a writer of great gift and high promise. Read review.

Unstrung: A Blanchard House Mystery by Cynthia Morrow: This classic “cozy” mystery in the English tradition is set in the cutthroat world of classical music, a world Morrow, a professional musician, knows well. When musicians Althea and Grace open a music school in an enormous house in the Washington woods and host a Christmas tea, one of the guests ends up dead. Complications ensue involving several dogs and cats, even more potential human suspects, and Althea’s raging crush on the investigating detective. It’s a large engaging cast, a wonderful setting and a grade-A read. Encore! Read review. Hiding in Water by Katherine Lippa: At times recalling the talent of writer Anne Lamott for her sassiness, wit and candor, Lippa tells the story of her childhood as the daughter of two parents who met in a religious cult in the ‘60s. Lippa’s deadbeat father portrays himself as a prophet with psychic abilities who convinces his daughter she can make anything happen by concentrating long and hard. When she uses her “powers” to wish someone dead – and they die tragically in a plane crash — Lippa starts taking the blame for subsequent world disasters, from the Challenger explosion to Chernobyl. Her memoir is a sterling piece of writing offering a refreshing take on what shapes a childhood. Read review.

Stretchers Not Available: The Wartime Story of Dr. Jim Rickett by John Rickett: Through his father’s wartime journals and letters, John Rickett paints a frank picture of wartime suffering, logistical nightmares, determinations and courage as seen through a surgeon’s eye in WWII-era England and Yugoslavia. Jim Rickett pulls no punches as he recounts his experiences operating on a dining-room table with the sound of a bombing raid in the background, running a front-line surgical hospital without adequate supplies and more. This   extraordinarily powerful book is highly recommended for WWII history buffs. Read review.

These books did not receive Stars but were highly praised by our critics:

Angels in Stone by Tanja Kobasic: A fascinating fusion of occult-powered fantasy and existential horror, this first in a projected five-book series revolves around a desperate woman’s attempt to save her marriage by enlisting the help of a voodoo priestess and the harrowing journey of self-discovery that follows. As she essentially embraces Satan, she realizes she is just a pawn in a millennia-long war between the forces of good and evil. Replete with dark imagery and symbolism, this page-turner continually develops and surprises. Read review.

The Dead Cattle Ranch Mystery by Madeleine Carroll: When his dad is deployed for a year of military service in this young adult novel, Francis and his mother go to live with his grandfather and help on the family ranch. As he explores the property and learns to ride a horse, “Frank” keeps his ears and eyes open to try and discover who has been poisoning his grandfather’s cattle. Meticulously written and edited, the plot keeps readers guessing at whodunit, and the mystery should rope in reluctant readers with ease. Read review.

A Traveler Never Reaches the End of the Road by Nedd Willard: A charming memoir of a peripatetic life, this book tells the story of Willard’s world travels between the 1930s and 1950s. The story takes him from his Manhattan birthplace and the rampant anti-Semitism of the time that led him to drop his surname, Rosenthal, to his time in the Merchant Marine and Navy, and later to his days in Paris, where he earned his doctorate at the Sorbonne. Throughout, Willard offers lively vignettes and ink sketches made during his travels that add up to a delightful read. Read review.

When is Enough, Enough?: Ten Things Any Aspiring Entrepreneur Needs to Know to Start and Run a Successful Business by Morongwa Makakene: This information-rich business guide bypasses misleading hype with a realistic picture of the mechanics of starting and building a business. A successful South African entrepreneur, the author delivers the sort of sound advice that is often glossed over by others addressing the same subject. Highly readable and highly recommended. Read review.