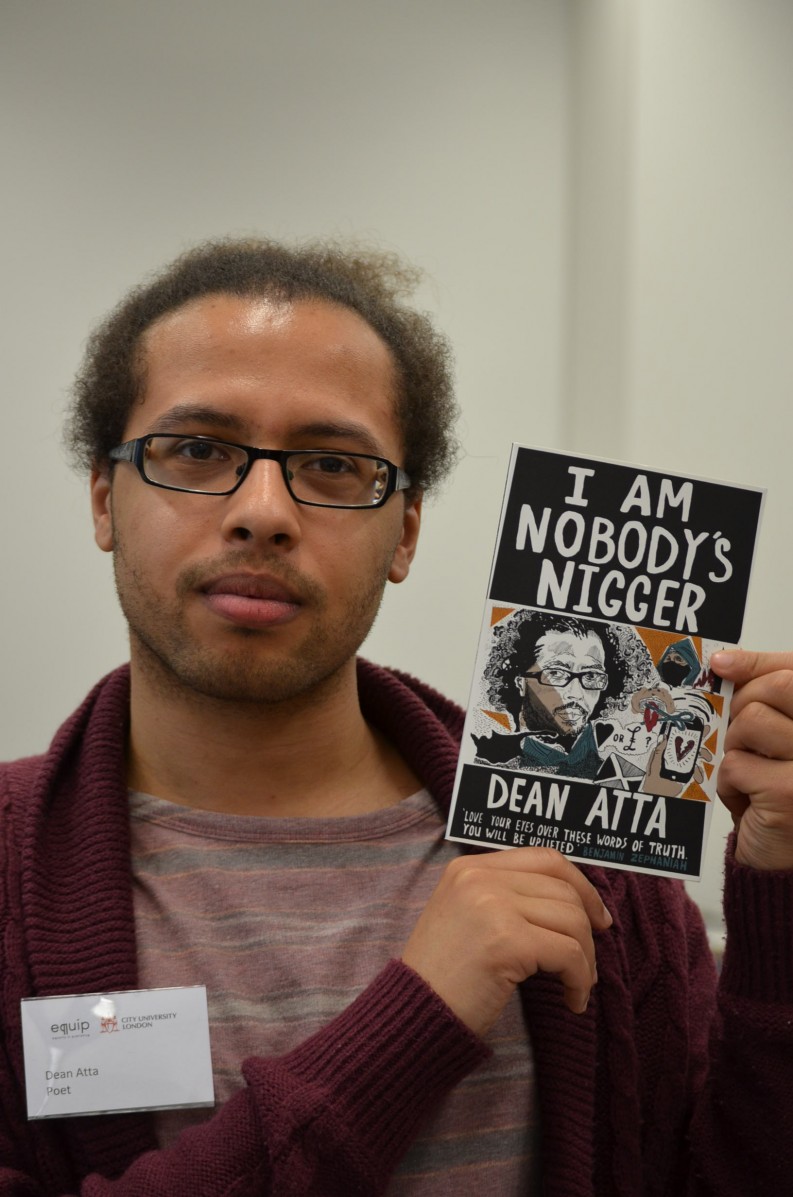 It was an appropriately shocking start to a day that dealt with one of the most difficult of topics: diversity in publishing. The young, mixed race poet Dean Atta opened the inaugural conference of Equality in Publishing (EQUIP) in London last week by performing his hard-hitting poem “I am Nobody’s Nigger” to an audience of publishing students, writers and publishing academics.

Atta’s poem was written in the wake of the long-delayed conviction of the killers of a black London teenager, Stephen Lawrence, a conviction that followed a public inquiry that found the Metropolitan Police Service — London’s police force — “institutionally racist.” The poem addresses the use of the N-word by rappers and begins:

“Rappers, when you use the word ‘nigger’, remember
That’s one of the last words Stephen Lawrence heard
So don’t tell me it’s a reclaimed word”

What has this to do with the book industry? Well, after Atta put the poem online in January last year, it immediately went viral and publishers beat a path to his door. “All one major house wanted to know about was: ‘What was my marketing strategy? How many followers did I have on Twitter?’” said Atta. “They didn’t ask about my poetry.”  He didn’t name the house, but gave enough clues for everyone to know it was Penguin.

Eventually, he went with Wesbourne Press, the new imprint of Saki Books, a left-of-center house well known for its championing of minority issues. He noted simply: “They had a vision for my poetry,” adding “And when I went to see them I saw diversity in their offices.”

There is so much is in that last comment. British publishing remains predominantly white and middle class. Does that mean it is institutionally racist? Of course it isn’t. But according to Creative Skillset, the industry body which supports skills and training for people and businesses to ensure the UK creative industries maintain their world class position, the BAME (Black/Asian/Minority/Ethnic) percentage of the publishing workforce in England and Wales is only 4%, while the overall BAME percentage in those same countries is 14.1%, (2011 census).

EQUIP is the organization hosted by London’s City University which looks at such issues “to help promote equality across UK publishing, bookselling and agenting, by driving forward change and increasing access to opportunities within the industry.” Its mission has moved beyond race, although that remains key, and it also looks at wider issues including sexuality and disability. A panel of young publishers gave their views of diversity in the industry. Joe Marriot, a picture book editor at Random House, said: “It’s not diverse at all. It is largely white, middle class and female. And there is also a lack of diversity in books published.” Liza Miller, an editor at Templar Publishing, agreed. “There is a very mono workforce in publishing. If you do want to do a more diverse book, it will have to be an ‘issue’ book, and when they try to do something else they get it wrong.” Anna McQuinn, founder and Publisher of Alanna Books, said: “I have found it difficult to get support from a picture book with a black character. The booksellers say they don’t sell. Also, I’m from Ireland and when you’re just one person from a minority, you can end up as a spokesman for an entire people, and that’s awkward.”

Marriot, who is mixed race, agreed that it was difficult being a lone voice, “but if you don’t have anyone in the room who is from a different background, you have no one there to remind people that a particular proposal might need to be more inclusive.”

Inability to Take Internships is Prohibitive

EQUIP conducted research on barriers to entry and one answer kept recurring: the cost of internships. Put simply, the preponderance of free or badly paid internships in publishing favors those with a family support network who effectively fund the placement — and this largely means white, middle class families. “There is a huge demand for these placements,” said Bobby Nayyar, Research Fellow at EQUIP and the driving force behind the conference. “Publishers have said to me that they cannot afford to fund these positions. They said why don’t you approach the banks? But I think it’s a bit shameful if I have to go to the banks to get money for EQUIP to fund internships. What does it tell you about this industry if it won’t support its own workforce?”

Gary Townsend, Executive Director of Creative Skillset, said that the film industry had done this ten years ago and that publishing needed to do the same. “Diversity has grown in the film industry as a result. There is now a Creative Diversity Network in TV, which gathers data about on and off screen portrayal of minorities, and initiatives like Move On Up, which hosts talent days to bring BAME talent to TV and radio.”

Although the situation is slowly changing, interviewees told EQUIP that there was a still an attitude of “employing people like us” i.e. white, middle class and largely female. One noted: “The irony, of course, is that publishing is a now a global brand selling to a diverse, global audience.” But how diverse it is on the inside?

In the UK, class plays its part too. It could be argued that decisions made by parents over which high school to choose for their children are a contributory factor to why British publishing remains largely white and middle class. It’s a broad generalisation, but better off, middle class families with lower BAME representation tend to choose selective (exam entry) or fee-paying schools.  These schools, selecting by high ability, produce the graduates of the future who may go into publishing without ever having had a Muslim classmate, a black classmate, or a refugee classmate struggling with English.

There are many passionate, well-meaning advocates of diversity in the top echelons of British publishing who have acted in anything but a diverse way when it comes to their own children’s education. Are they racist? Of course they’re not. They want the best for their children. Everyone does. Yet one cannot help feeling that Disraeli’s “two nations” begins forming at the age of 11 in the UK — the black kids at the state schools, the white kids at the “posh,” fee-paying, selective schools. Follow this down the line and you end up with a white editorial meeting where no one knows the first thing about these other worlds, and there’s no one there to speak for them either. Listening in the audience was Caribbean-born publisher Verna Wilkins, who founded Tamarind Books (now part of Random House) to publish more diverse books and who is now a consultant (as well as being at work on her memoirs). “For me, you have to get to people very young and begin challenging stereotypes. I work a lot in schools. I have had people say to me ‘where is the publisher?’ when I have come to give a talk. They’ve assumed I’m one of the cleaners. After all, how could I be a publisher? In one class I put up a picture of Samantha Tross. She’s a black orthopaedic surgeon, drop dead gorgeous. I asked the class what job they thought the person did — and it was all hairdresser, model, singer.”

Publishing staff who spoke to EQUIP’s researchers said more was needed to be done for school leavers to make publishing seem an attractive career choice, to help attract people outside the traditional university degree route. There were improvements however, even if how they were expressed made uncomfortable reading on the slides. One interviewee said: “Other brown people used to be the ones serving the drinks or on the door at publishing related events — that’s changing.”

This was a long, fascinating day that touched on some very sensitive issues. In a rather moving closing address, Nayyar said: “In the end it will not be the head that makes this industry more equal. It will not be the wallet or the purse, or the hands that graft and write and bind books and type metadata. It will be the heart. The collective heart of those who believe that individuals can make a difference in spite of what history teaches us.”