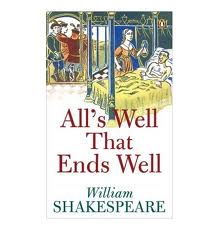 While Publishing Perspectives’ epic journey through the plays (and some of the sonnets) of William Shakespeare, “The Play’s The Thing,” is rapidly approaching what might be called his “masterpieces among masterpieces”—Macbeth, King Lear, and Antony and Cleopatra. But before we get to those, our next play, All’s Well That Ends Well is perhaps the most problematic of all the “problem plays,” a fairy tale without the promise of a happy ending, both highly undervalued (and highly ironic).

On the surface, it’s a tale of a poor physician’s daughter who finds her prince and succeeds in marrying him, but exposed along the way is the realization that fairy tale endings rarely mesh with human needs. It’s a play that, in the words of Marjorie Garber, “is constructed like an elaborate mechanism that goes off with a bang in the powerful final act;” but was largely ignored until the last half of the twentieth century, when a number of productions demonstrated the very special charm and intensity of this neglected work.

Harold Bloom argues that “fundamentally, we seem to misunderstand All’s Well That Ends Well, from Samuel Johnson, master of all Shakespeare critics, down to the present.” Join us then, we attempt to understand the “freest…of his trinity of problematic comedies.”

Get your copy of the play here.