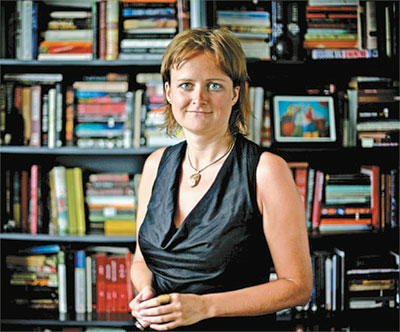 Peter Gordon and Jo Lusby are publishers work in two related but very different markets: Hong Kong and China. Peter Gordon is publisher at Hong Kong’s Chameleon Press, and a founder of the Asian Review of Books, the Hong Kong International Literary Festival, and the Man Asian Literary Prize. Jo Lusby guided Penguin’s efforts to enter the China market in 2005 and currently runs the Penguin North Asian office from Beijing.

How did you get into publishing in your market?

Jo Lusby: My entry point to publishing was trying to launch a bilingual entertainment listings magazine in Nanjing in 1999. The magazine didn’t take off, but I was recruited by a Beijing-based magazine publisher, where I subsequently worked for five years before joining Penguin. Peter Gordon is at the epicenter of the Hong Kong literary world.

Peter Gordon: I am originally a tech guy specializing in the development of non-English computer systems (my specialty was Arabic, but I worked on Russia, Thai, Turkish and many languages). I came to HK in 1985 and never went home. I struck out on my own doing various things, the most interesting of which was developing trade and investment relations with the former USSR and Russia for just over 10 years. In 1999, I founded Paddyfield.com, an internet bookseller. Paddyfield was one of HK’s first e-commerce firms, and one of the few that has survived for this long. My involvement with Paddyfield introduced me to Hong Kong publishing and a number of literary activities. I became president of Chameleon because I was asked to “adopt” it so I did. At the time, Chameleon only had a title or two.

What is the scope of your business?

Legal restrictions mean that we are not permitted to publish or sell directly in the market — instead we must work in partnership with local importers, retailers, and publishers. We are careful to invest time and expertise in our partnerships, to form sustainable relationships. At present, we have more than 150 books in print in Chinese in our partnership publishing, including the autobiography of tennis player Li Na. In July, we will partnering with CITIC Press to publish Jamie Oliver in Chinese for the first time, starting with 30 Minute Meals.

It is critical that our approach to China is two-way — publishing books out of China as well as bringing books in — and in addition to our local English language publishing programme, we have also worked to establish a literary translation training programme for early- and mid-career translators between the Chinese and English languages.

PG: I normally call what we do at Chameleon, i.e. English-language literary publishing, as the equivalent of Triple-A baseball (or Second Division football). One hones one’s skills, develops a readership — and the hope is that one’ll be scouted by the Majors. It does happen.

“…every book in HK must be a mega-bestseller or it isn’t really viable.”

This can’t really be called a business. Hong Kong needs a publisher; we can do this — and do a pretty good job — without losing (too much) money, so we do. We also offer these capabilities to other people and organizations who want to put books out for the local market but we specialize in poetry and literary fiction and non-fiction.

But more importantly, what we are working to do is to develop the infrastructure for a publishing industry in Hong Kong. Paddyfield provided online book distribution. Chameleon provides book production services.

Paddyfield and Chameleon became the foundation for our non-commercial activities, such as the Literary Festival which started in 2000. This was really Asia’s first international literary festival; TIME called it “The Best in Asia” in 2006. Most of the others in Asia today can in one way or another be traced back to the HK Festival — not a bad legacy.

All of these activities have catalyzed discussion and awareness — mostly in English, but they have given Chinese writers avenues into the English-language markets, introduced them to readers, etc. This is all useful and necessary pieces of “infrastructure.”

JL: The general English language market is more established in Hong Kong – English is still more widely spoken on a daily basis in Hong Kong than in China. In China, we know that our English books are primarily read by people who want to specifically improve their English, in order to get a better job or travel. In Hong Kong, this motivation also exists, but people also have a higher degree of comfort with English, and read for more general interest.

Is the market for English language publishing in China and Hong Kong growing or slowing?

PG: Hong Kong is a small market whose readers are basically similar in interests and sophistication to those in other major English-language markets. But the market is very small: I estimate it at perhaps 250,000, i.e. the size of a single small city or large town in the United States. This makes it difficult to operate in ways that would be recognized as economically viable.

For example, one needs to print 2,000 copies of a book to get any reasonable economies of scale (and even that’s low.) Given the different market size, that’s equivalent to selling something like 2,000,000 in the United States. In other words, every book in HK must be a mega-bestseller or it isn’t really viable. We have managed this on occasion.

English-language publishing in China, though, is different. This is a market that is potentially much larger, but it’s more of an “English as a Second Language” market. Of course, there a lot of native English speakers in China, but they are mostly served by imports (as are HK English-language readers). But there are some China-based publishers working in English. (Earnshaw comes to mind.) JL: Nothing has really slowed in China, as the market is still in a growth phase, spurred on by new store openings (independents as well as chains) and greater range offered online. Self-improvement is a very popular and growing category, but more so in the Chinese language than In English.

We are seeing growth across the board of categories in our English sales – and the main growth is among Chinese readers of English, aged 16-30.

PG: China is also a growing market for imported English-language books. Someone must be reading them. Huge numbers of Chinese have gone to University or College in the US or other countries and have returned with the ability to consume English-language content.

What has been your experience with ebooks in China?

JL: The market is in its very early stages – not as established as the US or the UK. We sell our UK and DK books through a distribution partner Founder Apabi at present.

PG: As I mentioned, I originally got into the business via Paddyfield, the Internet-enabled bookseller. Of all the activities we have, Paddyfield is “the business” in the sense that it is large enough to make economic and commercial sense. Paddyfield succeeded by doing a few things rather well: we were able to sell books at the original US and British list prices — HK bookstores had, traditionally, non-trivial mark-ups. We also introduced a HK version of school book club catalogues, delivering high-quality children’s books at reasonable prices. Books in HK used to be relatively expensive; that is no longer the case, and Paddyfield had, I think, had a great deal to do with that.

Whenever I have been asked when electronically delivered books will supplant traditional books, I answer “In about five years.” I have been giving that answer for at least a decade and, like a stopped clock, I may finally have the timing right.

What was the best-selling English language book in your market last year?

PG: This I don’t know, I’m afraid. In general, HK bestsellers tend to track US/British bestsellers. There is occasionally an exception when a book is particularly HK-oriented.

JL: Interestingly, the biggest seller for Penguin was 1984 by George Orwell. The overall bestseller (non-Penguin) was [Walter Isaacson’s] Steve Jobs biography. The two sum up the drivers of the China market – the latter being front list, business, inspirational and aspirational, the former being a solid book that readers have probably previously read in Chinese, that is taught in classrooms, and with a message that has resonance in contemporary China. How has publishing in China reacted to the Fifty Shades of Grey phenomenon?

JL: Pornography is banned in China, and Fifty Shades is not yet widely available because of uncertainty about how to categorize it. I understand the Chinese rights have been sold, and the publisher is trying to negotiate approval to publish. However, I do know that lots of people have read it, either in English or by translating paragraph by paragraph in online translation software.

PG: I don’t have the answer to this. The Chinese are pretty good at spotting a commercial opportunity.

Who do you think are some of the notable authors from China and Hong Kong writing in English today?

JL: Paul French’s history books on China are great, and John Garnaut’s recent The Rise and Fall of the House of Bo is wonderful.

PG: There are significant problems of definition. There is Janice Lee’s The Piano Teacher, set in HK by a writer who lives here — but whom one could also argue is “American.” There is Chetan Bhagat, a huge bestseller in India, who used to live here and wrote his first books here.

But I think the best work by Hong Kong writers who live here and who write about Hong Kong is probably in the genre of poetry. There are several: one deserving of particular mention is Leung Ping-Kwan, who unfortunately passed away just a few months ago. Leung wrote in Chinese, but also in English and managed a particular fusion unique to Hong Kong. We have two new collections of his poetry this year, and one of his from last year recently won the Singapore Literary Prize).

What is the best kept secret about publishing in China and Hong Kong?

JL: It is possible to run a successful publishing business in China.

PG: I don’t know that there is a secret, but I believe to publish in Hong Kong you must have a real love for poetry and literature.