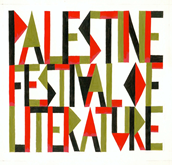 Now in its sixth year, the Palestine Festival of Literature (PalFest) continues to bring authors and literature to a people who cannot travel to literary festivals themselves.

After last year’s edition, which was held in Gaza, for the first time the Festival will organize events and bring authors to cities across all of historic Palestine. Beginning May 23rd, two groups of authors will travel to the cities of Haifa, Nablus, Jerusalem, Ramallah and Gaza city where free public events will be organized. The participants this year include Chicago-based Ali Abunimah, founder of The Electronic Intifada, author China Miéville, three-time winner of the Arthur C. Clarke Award, Mornings in Jenin author Susan Abulhawa, London Review of Books contributor Jeremy Harding and playwright Omar El-Khairy.

Public events will begin in Ramallah with the participation of PalFest founder and author Ahdaf Soueif, novelist Gillian Slovo and the poet Ahmad Dahbour. Seven literary workshops will be held at Birzeit University including sessions on developing short stories with author Aamer Hussein, creating character and voice in poetry, with award-winning Tom Warner, and the art of blogging with Arabic Literature (in English) founder Marcia Lynx Qualey, who will be blogging about PalFest throughout her stay in Palestine.

The festival will close May 31 at Birzeit with a public event for families and children entitled a “Festival of Stories and Strange Creatures.”

According to the Festival’s website, one of the underlying principles of the Festival is to break “the cultural siege imposed on Palestinians by the Israeli military occupation and strengthening cultural links between Palestine and the rest of the world.”