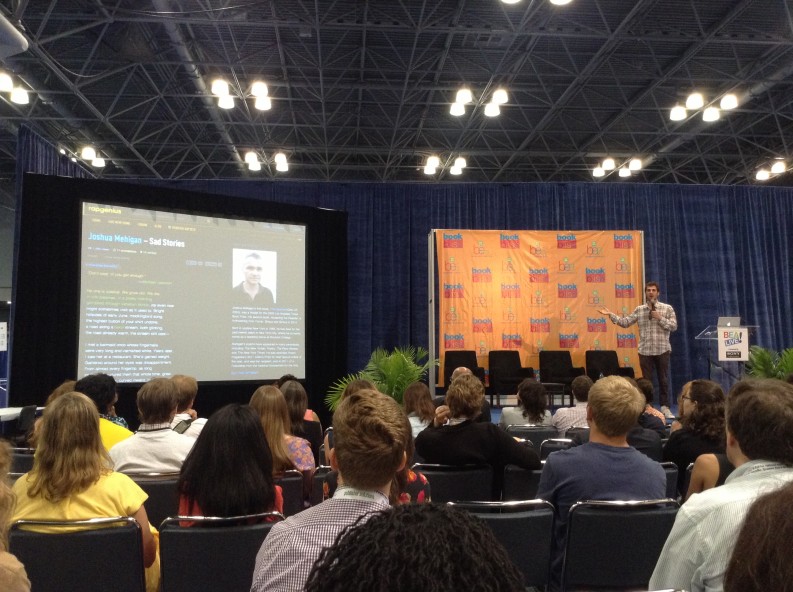 “Now you think I’m a pervert, but that’s okay.”

For those who might have wandered over towards the BookExpo America’s Downtown Stage at 4:30 yesterday and heard this line uttered, they might have wondered what they were stumbling into. But, it was simply the final speaker — Jesse Bering, psychologist and author of the forthcoming book Perv: The Sexual Deviant in All of Us — wrapping up his presentation at the 7x20x21 panel at Book Expo America hosted by Ryan Chapman, Associate Director of Marketing at Atavist Books, and Ami Greko, Senior Vendor Relations Manager at Kobo. Ohanian, who founded the popular social news and entertainment site Reddit where registered users submit content and linksand other users rank the post, kicked off the program by talking about the democracy of the internet and how it has allowed good ideas to come from anywhere and spread naturally and organically.

“The internet redefines what it means to be an entrepreneur,” said Ohanian. “Innovation is not just Silicon Valley, it’s happening all over the world, including the heartland.”  Reddit has raised hundreds of thousands of dollars for causes, lead the charge on changing public policy (SOPA), and continues to be moved by the great ideas that come from its users. Kickstarter does something similar in allowing users with a great idea and who cannot afford to create their project on their own, to open it up to raising funds from anyone who is interested. Democratizing what used to be a difficult process of how to afford to write and publish a book, Pereira said they have sponsored 522,000 book projects, with the projects, on average, getting 40% more money raised than asked for.Rap Genius began as a Wikipedia for rap lyrics where users can explain the meaning or verified artists can share the stories behind the lyrics. What they didn’t expect was that users would start uploading other written work–the State of the Union, the Great Gatsby, and use the site for large-scale discussion of literature in schools. Readmill, a unique ereader that allows users to interact within the margins of ebooks, also does some annotation and crowdsourcing, but it has allowed greater one on one interaction among readers.

Berggren shared one story of how two users fell in love and one asked the other to marry him. “If you don’t like to read, maybe you can go on Readmill and get lucky,” said Berggren.

And a panel about the internet would not be complete without talking about the most pervasive part of the internet–pornography and sexual deviance. But, Bering’s talk democratized even that. We are all a little bit deviant sexually. To understand why, just read his book.