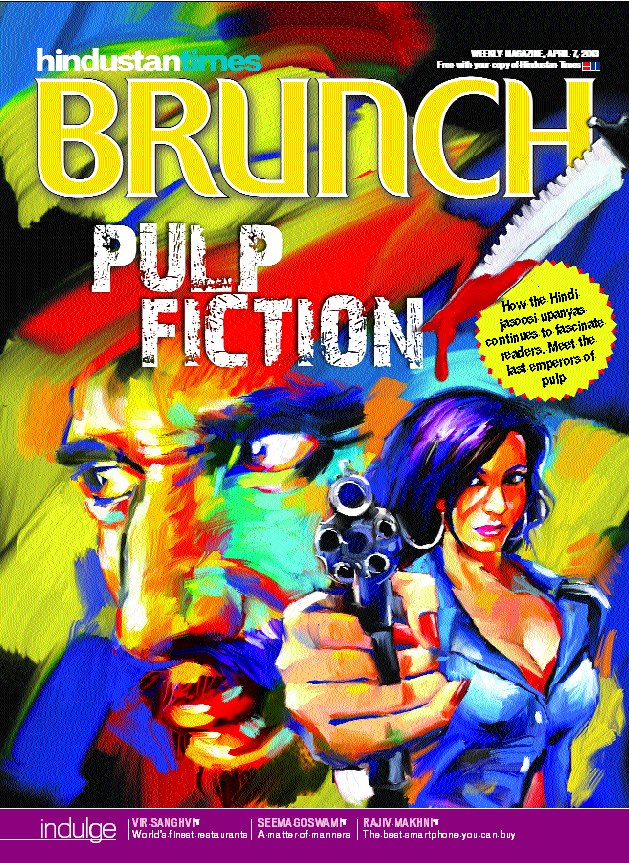 In the Hindustan Times, Aasheesh Sharma takes a peep into the noir world of Hindi pulp fiction, “India’s answer to the West’s airport novel: where the plots are outlandish, the characters over-the-top and the titles out to grab your eyeballs.” And like the west’s airport novel, it is at bus and train stations that large numbers of Hindi crime fiction sells. Rakesh Jain of Dheeraj Pocket Books (located in Meerut, the epicenter of publishing for the “jasoosi upanyas”), said that “Most train passengers step on the platform and get drawn in by the sensational titles and garishly illustrated jackets.”

The paper, made from cheap wood pulp means that the books are usually priced less than a cup of coffee. But, as publisher Rajkumar Gupta of Raja Pocket Books said, “The readers of the jasoosi upanyas are one of the most demanding in the world. They want their money’s worth. So, if the books of [Mohan] Pathak, one of our authors, are priced at 100 rupees, and the others are at 50, they want better production quality and fantastic page-turners.”

Laura R. Brueck, an assistant professor of Hindi Literature at the University of Colorado recently visited Meerut for a research project entitled “Jasoosi Upanyas: The Hindi Detective Novel in Late 20th Century India,” and was quoted as raving about what she learned:

I was impressed with the diversity of writing styles. Each jasoosi novelist is individualistic. Surender Mohan Pathak’s writing, for instance, closely mirrors the nuances and complexities of vernacular speech. Ved Prakash Sharma, on the other hand, builds multiple suspenseful scenes that rapidly layer one on top of the other. His use of interjections like ‘parantu!’ and ‘phir!’ gives his writing a delicious cartoonish feel, like older episodes of Batman and other superhero comics.

But unfortunately, profits are down to just 15%, according to Hindi pulp publishers, a nearly unimaginable drop from the almost 100% margins of just a few decades ago. Why? The explosive growth of the Internet in India as well as a declining market.

In fact, in The Sunday Guardian, Pawanpreet Kaur charted what he calls “the sad demise of Hindi pulp fiction.”

The article quotes N.K. Verma, chairman of Diamond Pocket Books. “The origins of pulp fiction in India can be traced back to Jasoosi Panja, an Urdu magazine that was published from Allahabad in the 1950s. Its publisher Akram Allahbadi, was a prolific writer and trade unionist who produced some of the most popular works of Urdu pulp fiction.” It was the magazines popularity that prompted Diamond to start the ‘Rs 1 series’ of Urdu paperbacks in 1958. Just a few years later, Hind Pocket Books published the first of its Hindi pulp fiction books, kicking off a “wave that was to grip the country’s Hindi belt.

The books were most popular with housewives, college students, “frequent travelers, old-timers and aficionados.” At the peak of its popularity, more than 50 publishers were producing pulp fiction. But in 1992, satellite television arrived in India, which, as Kaur points out, “heralded a slow and painful death” for the industry. Sales plummeted, with the industry suffering an 80% drop in sales, forcing publishers to move into other genres such as biographies, “spiritual and health guides, and self-help books” just to stay in business. Illustrator Mustajab Ahmed Siddiqui, known as “Shelle” noted that “Today, pulp fiction, on average, accounts for less than 25% of total publishing, a huge drop from its heyday. Although big writers like Mohan Pathak are still selling, the overall picture is quite dismal.”

Even so, Surender Mohan Pathak, the author of nearly 300 novels, remains optimistic, insisting that there is still an audience for stories that allow readers to escape the drudgery of their everyday existence. “I’ve been writing for five decades,” he told the Hindustan Times. “Who knows what happens after I am gone. But till the time I am here, I’ll provide quality writing to my readers.”

But most writers of pulp fiction are lacking in literary pretensions. “Aaj kal ke writer ko likhne se pehle bikna aana chahiye,” says Amit Khan, who, at 41, is one of the youngest proponents of Hindi pulp. “If literature is the good wife, pulp is a harlot.”