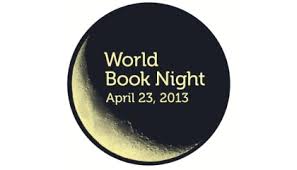 Tonight is World Book Night, which means that more than 25,000 volunteers throughout the United States are going to be handing out a half a million free books to help promote reading and community.

Volunteers will each be distributing 20 specially printed copies of a book they have loved and read in both public and private locations – places like nursing homes, underfunded schools, VA hospitals, family shelters, Little League games, subways, firehouses, and diners.

In Kentucky for example, a woman who was once a resident of a women’s shelter who is now living on her home, will be returning to the shelter to give out books. Three generations of givers are going out in Detroit, New Orleans, and on a military base in Okinawa. High school students and advisors in Queens, New York, will visit a school damaged by Hurricane Sandy to hand out WBN editions in English and Spanish.

World Book Night U.S. Executive Director Carl Lennertz said, “Our volunteers are truly generous and creative people who love books and care about sharing the written word with those who perhaps lack the means or access to books, or have gotten out of the habit of reading.”

World Book Night U.S. is celebrating its second year of book giving. World Book Night was launched in the UK and Ireland three years ago, and is celebrated on the anniversary of Shakespeare’s birthday. The effort is supported by publishers, book manufacturers, Federal Express, and more than 2,300 bookstores and libraries nationwide.

The books being given were chosen by an independent panel of booksellers and librarians. Thousands of each World Book Night title, including two Spanish-language editions and one book in large print, were printed as special paperbacks. Some of the books have an added page that the recipients can send back to World Book Night with comments and thoughts.

Lennertz added, “This is a beautiful mix of books that match the volunteers’ passion to share – the givers applied last fall to be WBN volunteers online by essay and book choice request – as well as appeal to the half million recipients of the books, some of whom might be getting the first book of their own, ever. We looked for diversity and variety in the book choices: subject matter, age level, ethnicity and geography. And we thank the authors, who have agreed to waive royalties on the World Book Night editions.”