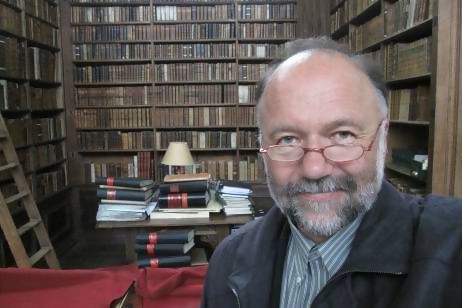 Andrei Kurkov was a self publisher as far back as 1992.

Acclaimed Ukrainian writer Andrei Kurkov was a self-publisher long before it became trendy. Kurkov wanted to publish his novel The World of Mr. Big Forehead, as well as a children’s book, The Adventures of Baby Vacuum Cleaner Gosha, and borrowed $16,000 to buy six tons of paper form a supplier in Kazakhstan. Not book paper, but paper for wrapping up food. And instead of a traditional book printer, he was forced to enlist the services of a sheet music publisher.

“What I did as a self-publisher was probably never repeated,” he explains. “It was 1992 and we had a unique situation — a total crisis — in Russia. Instead of police and courts, the mafia was replacing the state” — a scenario he reflects in his 1996 novel Death and the Penguin.

Kurkov continues, “From one side it was crazy easy to organize things, but on the other hand it was incredibly risky.” The biggest risk: not getting paid.

One night, after he collected 10,000 copies of his books from a distributor who’d failed to pay for the books, he paid a funeral home to cart the books away. But since he couldn’t unload them until the next day, he bribed the driver with vodka to let him sleep with the books so they wouldn’t be stolen.

“For 18 months I wasn’t writing, but printing, publishing, selling and chasing down people who owed me money. The experience made me stronger. It was useful. It taught me the system and how to treat dishonest people accordingly.”

Today, Kurkov is among the most widely read writers translated from Russian and known for his oddly prescient surrealist fiction. This includes his latest novel, 2011’s The Milkman in the Night, about a woman who sells her breast milk in the streets of Kiev to survive, and The President’s Last Love, which featured the poisoning of the Ukrainian president and was published six months before the exact thing happened to Ukraine’s actual president Viktor Yushchenko was himself poisoned.

Even though his books have reflected and even predicted reality, Kurkov points out that “readers don’t want to find the same stuff in books that they find in the news.” This is particularly true of countries that have labored under oppressive regimes, like the Soviet Union.

“In the Soviet period, nearly all the fiction was in the form of anti-communist fairy tales — novels like Bulgakov’s or Sinyavski’s short stories. And Latin America produced magic realism.”

Though Kurkov was born in Russia and writes in Russian, he is a Ukrainian citizen and has been lobbying for Russian to become an official language of the country for many years.

“Language is a reflection of politics,” he says. “The reason, for example, you see a lot of straight prose come out of countries like France and Germany — countries that like to read fairy tales and exotic stories — today is that countries with a stable political system produce realistic writers. Comfortable writers produce comfortable books.”

Andrei Kurkov will be interviewed by Publishing Perspectives’ Editor-in-chief Edward Nawotka on Thursday, April 25, 19:15-20:15 at The Tent of the Abu Dhabi International Book Fair.

This article was made possible by the sponsorship of the Abu Dhabi International Book Fair.