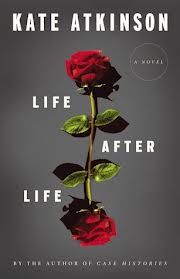 The novel in question is Kate Atkinson’s Life After Life, (Little, Brown and Company), a fiendishly clever, beautifully written book that hits that perfect sweet spot where popular fiction and literary fiction all too rarely meet.

The premise is simple. On the cold and snowy night of February 11, 1910, Ursula Todd is born to an English banker and his wife. And then promptly dies on the next page. But then on the next page is born again, and lives.

It’s a story of death and rebirth, of a character who is continually killed off and continuously returns, a brilliant illustration of the ways in which a single decision can affect our lives and those around us.

Imagine if you will, Janet Leigh in Psycho. In one version of the story, she ends up at the Bates Motel and meets her demise at the hands of Anthony Perkins. In another telling, she decides to drive a little further to find a better motel. In yet another, she doesn’t steal the money from her employer at all, and her life goes in a completely different direction entirely.

So it is with Ursula. On Armistice Day she enters the kitchen while the maid’s boyfriend is there. He’s been exposed to the flu and gives it to her, they both die within days. Or, she stays upstairs that evening and isn’t exposed — he dies, she doesn’t. Ursula is in London during WWII, volunteering with the ARP. Or Ursula ends up in Germany, friends with Eva Braun and her guest at the Berghof. One life, so many possibilities, so many roads that can or could be traveled.

All of which might make it seem as if the book could end up being too clever by half. But surprisingly, it’s not. The story (or stories) are told cleanly and straightforwardly — there are no authorial winks of knowingness, nothing is forced, there’s none of that congratulatory self-awareness all too typical of post or post-post modern literature. It’s just the story (or stories) of a woman’s life. A demonstration of the many possibilities that any life has to offer, as well as a virtuoso display by an author at the peak of her career of the many storytelling and narrative possibilities they have at their command.