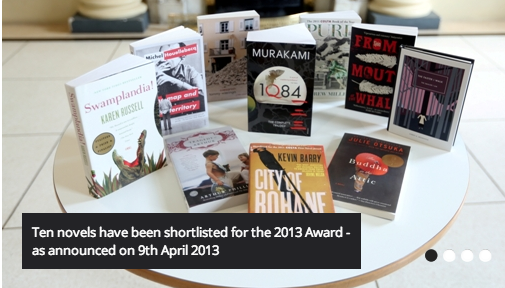 And then there were ten.

From a longlist of 154 titles, ten novels have been shortlisted and are in the running for the €100,000 2013 International IMPAC DUBLIN Literary Award.

And it is a list that is, in fact, truly international, including one book by Irish author Kevin Barry, five translated novels (from Japan, Iceland, Norway, The Netherlands and France); one British and three American novels.

The shortlist, announced by the Lord Mayor of Dublin Councillor Naoise O Muiri, Patron of the Award, includes:

“This is a list of high quality literature that includes five novels in translation which readers might not get the opportunity to read,” said the Lord Mayor. “And I am delighted to see an Irish author, Kevin Barry on the list. This is a real tribute to the quality of Irish contemporary writing.”

Margaret Hayes, Dublin City Librarian noted that, “This is the highest number of books in translation on the shortlist since the award began, and it is wonderful to have novels from Japan and Iceland as well as France, The Netherlands and Norway. The list also includes novels from the USA, the UK, and Ireland. There is something here for everyone and I urge readers to get stuck in and enjoy the humor and sadness, history and fantasy, teenage and elderly angst on this year’s list.

The ten shortlisted titles were nominated by public in libraries in Estonia, Germany, Ireland, Norway, Russia, South Africa, Spain, The Netherlands, and the USA.

Two of the shortlisted authors are previous winners: Andrew Miller won in 1999 for his novel Ingenious Pain and Michel Houellebecq won in 2002 for Atomised. Two of the shortlisted novels were first novels: Kevin Barry’s City of Bohane and Kjersti Skomsvold’s The Faster I Walk, The Smaller I Am.