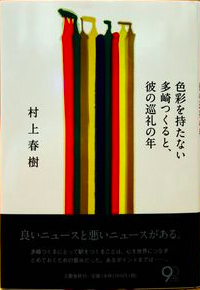 The Japan Times reports that fans of Haruki Murakami lined up at bookstores “from the wee hours of the morning” on Friday morning in order to be among the first to get their hands on the critically acclaimed author’s much-anticipated new novel.

Shikisai wo Motanai Tsukuru to Kare no Junrei no Toshi (Colorless Tsukuru Tasaki and the Year of His Pilgrimage), published by Bungeishunju, is Murakami’s first book since his 1Q84 trilogy, and has a prerelease print run of 600,000 copies. It is already #1 on Amazon.co.jp’s bestseller list.

A female Murakami fan, who asked to remain anonymous told the paper, “I must be at work at 7:30 am, so I have about an hour to start reading. I will probably spend my lunch break reading the book as well.”

The Guardian reported that Michiko Mamuro, a bookstore employee in Tokyo, read the book’s 370 pages in just a couple of hours, and revealed that the March 2011 earthquake, tsunami and nuclear meltdown form the book’s backdrop. “I got the impression that Murakami faced the disaster head on,” she told the Asahi Shimbun. “The book is filled with strong messages and many encouraging words.”

According to the Asahi Shimbun’s early review, the novel is “the tale of a man who tries to overcome his sense of loss and isolation,” and who, at the age of 36, is looking back on his empty colorless life. The novel opens, “From July of his sophomore year at college to January next year, Tsukuru Tazaki was living while mostly thinking about dying.”

It is said that Murakami himself was surprised by how the book ultimately turned out. As he told Reuters, “One day I just felt like it, and I sat at my desk and started to write the first few lines of this story. Then for about half a year, I continued to write this story without knowing anything like what would happen, what type of people would appear and how long the story would be.”

Even so, as quoted by The Guardian, one Twitter claimed he wouldn’t have to read the book to know the storyline. “It’s about a man who is smart but lonely, has no friends, but somehow attracts women and makes spaghetti.”

A publication date for the book in English has yet to be announced.