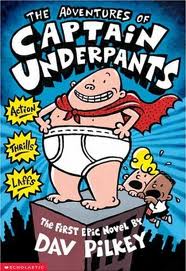 Yup…go figure. This is the most offensive book of 2012.

The American Library Association’s annual study of “challenged books” — books subject to complaints from parents, educators, and other members of the public and removal from school and library shelves has been released. And E.L. James’ best-selling trilogy, Fifty Shades of Grey, perhaps not surprisingly, made the list, but only at #4. So what was more offensive?

Perhaps not surprisingly, this year’s “winner” was not altogether displeased at receiving the “honor.”

“It’s pretty exciting to be on a list that frequently features Mark Twain, Harper Lee, and Maya Angelou,” Pilkey said in a statement. But I worry that some parents might see this list and discourage their kids from reading Captain Underpants, even though they have not had a chance to read the books themselves.”

The ALA’s Office for Intellectual Freedom defines a challenge as a “formal, written complaint filed with a library or school requesting that a book or other material be restricted or removed because of its content or appropriateness.” The office received 464 challenges in 2012, a 25% increase from 2011. And while exact numbers, including the number of books actually pulled from shelves are hard to calculate, the association has long believed that for every complaint registered, another 4–5 go unreported by libraries, while some librarians might preemptively restrict access ahead of any anticipated objections.

Among the other titles on the list are Khaled Hosseini’s The Kite Runner (cited for homosexuality, offensive language, religious viewpoint, and sexual explicitness), John Green’s Looking for Alaska (cited for offensive language and sexual explicitness), and that long time favorite, Peter Parnell and Justin Richardson’s And Tango Makes Three, the story of two male penguins who raise a baby penguin.

Read the ALA’s annual “State of the Libraries” report.