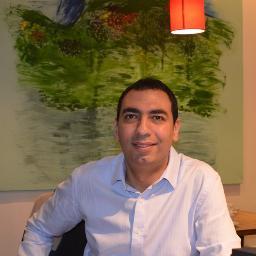 Emad E D El Akehal (MD of Elkotob.com and the CTO of The Book Depository) and Salah Chebaro (CEO of Neel wa Furat) will take part in the discussion “The Power of Information” on Wednesday, April 24, 2:30 p.m. to 3:45 p.m. at the eZone of the Abu Dhabi International Book Fair.

Metadata may be a familiar topic to those with mature online marketplaces, but in the Arabic-speaking Middle East and North Africa, where digital publishing is still evolving, a dearth of metadata poses unique challenges to retailers and publishers alike and is slowing the development of online marketplaces.

“In my view the biggest challenge is the lack of information and resources that support the publishing process through its life cycle and the absence of data-sharing between internal and external value chain partners in publishing,” says Emad Eldeen Elakehal, MD of Elkotob.com and the CTO of The Book Depository (both Amazon-owned companies, though the views here expressed are entirely his own).

“Talking about ISBN in particular, although the international agency is doing a great job, you find a tiny number of local agencies in the Arab world that are not up to the job and their performance affects negatively the take of organized and efficient supply chain with proper use of metadata and its standards in the Arab region. Issues like this however require jointed efforts of all players of the book trade to be solved. Emad Eldeen Akehal: “One classification for religious books won’t do.”

“The majority of publishers are still using traditional methods to create their data, and there are hardly any tools to manage it. There is also misunderstanding of the nature of identifiers role — such as ISBN — hence the implementation and use of these identifiers is not accurately done and is not that common yet.” He stresses that it is important to “use internationally recognized and widely used books standards to organize and exchange metadata.”

Salah Chebaro, CEO of Neel wa Furat, a leading online bookstore in Middle East, agrees. He points out that metadata for Arabic books is “nearly non existent…this means that you have to create create your own numbering system yourself, and this means that you cannot share data with other companies.”

One option would be to establish a specialized company to develop consistent system that could be applied across the region. That said, free tools already exist that support Arabic and are compatible with the global metadata databases and standards. The trick is getting publishers to use them.

And of course, the Arab World poses a unique and distinct environment for publishers who want to implement metadata. When one-third of the books in the region are religious titles, one simple classification for religious books won’t do.

“Metadata has many important roles to play such as book discovery, customer persuasion, financial transaction support, accurate fulfillment, and better pricing calculations,” says Akehal, who has developed a new ONIX subject category scheme appropriate to the content of Arabic-language books and plans to announce this at next week’s Abu Dhabi International Book Fair.

“Considering the ever increased intellectual production of humans around the globe, there are more books today than any single individual might read in a lifetime or many lifetimes. It is becoming a great challenge to find the right book. The correct specification of the subject category and complete set of other elements will help in identifying the right title by narrowing the search scope.”

For his part, Chebaro would like to see ISBNs assigned for old Arabic books “once and for all.” He’d even like to see metadata embedded in book covers in the form of QR codes or another means which too might aid in book discovery.

All said, until such a time when there is widespread implementation of metadata best practices across the Middle East the ability of local marketplaces and publishers to reach a global audience will remain hamstrung.

This article is supported by the Abu Dhabi International Book Fair.