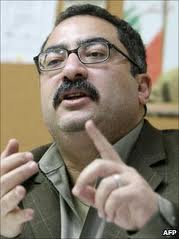 Should the changing political landscape affect how we read and write?

Fiery Egyptian journalist, editor, and popular novelist Ibrahim Issa spoke at the Abu Dhabi International Book Fair this week on the topic of “How to write and how to read after the Arab Spring.”

Although Issa is at the fair this year because his latest novel, Our Master, was shortlisted for the International Prize for Arabic Fiction, he is best known as a newspaper man and political commentator who was hounded for years by Mubarak-era censors. Mowlana was shortlisted for this year’s IPAF Award

For Issa, publishing has been a lifetime passion. He put out his first magazine, al-Haqiqa (The Truth) while a pre-teen in Menufiya, distributing it to schools and newsstands on his own. By age 17, he was at work on the state-owned newspaper Rose al-Youssef. But because he couldn’t toe the newspaper’s political line, he was switched into the literary department. Not long after, he left to found his own newspaper, Dostour.

Through Dostour, Issa became a well-known opposition figure, but he never lost his love of literature. As the years passed, and particularly when he was prevented from publishing, Issa wrote novels. Our Master was his seventh.

Although the novel tackles contemporary themes, Issa said in an interview for the blog ArabLit, he does not write novels “as a political act.”

Writing, he said, must be fun: “I write because I have always wanted to tell a story. Because I see what others do not see and I want them to see it. I write so I don’t have to see a therapist. It brings out things in me that would otherwise come out in dreams or the like. And I frankly write in order to entertain myself. If I don’t enjoy it, then there is no point in writing.”

Issa’s latest novel has entertained thousands of readers, and has been a top-seller for publisher Bloomsbury Qatar Foundation Publishing. The book tells the story of Sheikh Hatem Shinawy, the book’s “master,” a permanent and popular guest on a religious TV program.

Years back, Issa himself worked in producing and presenting religious television. “This gave me a lot of knowledge and awareness of the industry of religion in Egypt — I do believe it is an industry.”

Issa said that he believes the Egyptian novel will have to adapt to a new landscape. “Before it used to be a fight against political oppression. Now it will be political and religious oppression. The literary text will have to face this.”

M. Lynx Qualey is the founder and editor of the news site Arabic Literature (in English).