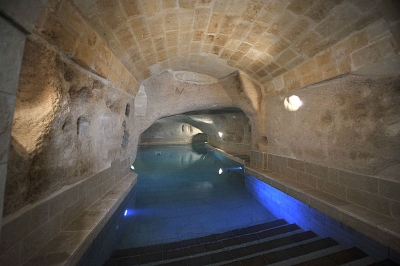 Matera, best known as a UNESCO World Heritage site famous for the haunting beauty of its Sassi District, a collection of cave dwellings going back to the Paleolithic era, has recently become the unique setting of a very special four-day writers’ retreat called “Brainstorming at the Spa.” Why the spa? Because it is housed in The Locanda San Martino, a charming hotel carved in the Sassi hillside that boasts a spa in an underground cave, complete with a swimming pool, Jacuzzi, Turkish bath and sauna. The spa serves as a rallying point to relax after hours spent “brainstorming.”

Launched three years ago, with two sessions a year, one in the spring, the other in the fall, it is the brainchild of author Elizabeth Jennings aka Lisa Marie Rice (her 23rd novel, Heart of Danger, was published in October 2012 by Avon Red; her next, I Dream of Danger, is coming out in June 2013). She is also the founder of the International Women’s Fiction Festival, the most popular writers’ conference on the European continent outside the UK, now at its 10th edition.

The conference always takes place in Matera at the end of September and a Brainstorming session is held in parallel under the guidance of author Sophie King — aka Janey Frasier/Jane Corry — and Italian literary agent, Maria Paola Romeo of Grandi e Associati Literary Agency. As Elizabeth Jennings puts it, “Four days intensely brainstorming your book with other writers and with a smart and creative agent…something good inevitably comes out. I am now writing the third book of a trilogy, the Ghost Ops trilogy, that I originally brainstormed at the first Brainstorming at the Spa. It is a departure for me, futuristic paranormal, and I could never have managed it without my brainstorming buddies.”

The latest Brainstorming session (held March 22-25) was once again expertly conducted by writing coach Christine Witthohn, who is also an experienced literary agent with a deep understanding of publishing and the changes brought on by the digital revolution. Half a day was devoted to different ways to promote a book and how to build a platform. The rest of the time was given over to the participants debating their books — usually a small group (around 10-12), all very different writers, working in different genres and coming from different areas of the world: America, the UK and also Germany, France, Italy.

They are at varying points in their careers. Some are still unpublished and newbies, others traditionally published — either with a long experience or just starting out — and yet others self-published, not to mention those who are bloggers and journalists. Christine Witthohn felt that this extraordinary variety “added flavor,” enabling “you to come up with things you’d never thought about and come across new exciting ideas.” She found the brainstorming so creative it reminded her of why she became an agent in the first place.

A major benefit of brainstorming, Elizabeth Jennings likes to point out, is that “it speeds up the plotting process, it brings out in the open all sorts of corollary ideas and, ultimately, it helps in writing out the synopsis.” Many credited the Brainstorming with helping them to come up with their next book, among them Elizabeth Aston, aka Elizabeth Edmondson, who found it invaluable in finishing two very different books — the first, a historical rom com, and, the second, a dark historical spy thriller. “Brainstorming at Matera is a kind of magic,” she said. “You start with anything — a vague idea or a knotty problem from a work in progress — and then, by an extraordinary alchemy of combined imaginations and brains, what was one or two dimensional is suddenly 3D.”

Likewise, S.G. Redling, author of the brilliant debut novel Flowertown published in 2012, fruitfully brainstormed Damocles, a science fiction book that will soon come out under the Amazon 47North imprint. She found that, surprisingly, she got a boost from brainstorming someone else’s story. “When it’s not your own baby and your own characters,” she explained, “you feel a freedom to cast your net a little wider, dig a little deeper, think farther afield.”

For many participants, brainstorming is also about networking, breaking down the writer’s wall of solitude. And the good thing is that the networking continues long after the brainstorming sessions end, either directly through emails or Facebook.

Brainstorming is never a waste of time. As New York Times bestseller Shannon McKenna says, “I automatically resist at the beginning all the ideas that come to me from the outside. I can’t help myself, but slowly, they percolate down and I start to see solutions to problems. It changes the cards on the table, reshuffles, offers up surprises.”

Anyone wanting to reshuffle their writing cards should get in touch with the International Women’s Fiction Festival for details and registration at the next brainstorming session in Matera scheduled from September 26-29, 2013.

Claude Nougat, writer, poet and economist, is the proponent of Boomer lit and author of several books, including boomer novel A Hook in the Sky and contributor to Freeze Frame, an international poetry anthology curated by British poet Oscar Sparrow. She participated in several Brainstorming sessions in Matera.