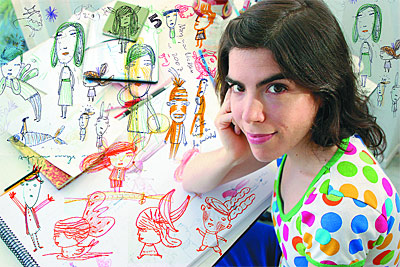 Isol, in addition to being an illustrator and cartoonist, is a well-known musician in her native Argentina.

The award is presented annually by the Swedish government to an individual or organization working “in the spirit of Astrid Lindgren” to “safeguard democratic values.” There were 207 candidates from around the world competing for this year’s prize.

Isol, born Marisol Misenta in Buenos Aires in 1972, is an illustrator, cartoonist, graphic artist, writer, singer and composer, and was selected for the award by a jury of 12 international “children’s literature experts.” Her books, according to the official announcement, expose the “absurdities of the adult world.”

The jury chair, Larry Lampert, said that author was, perhaps not surprisingly given the amount of the award, “very happy and very surprised” to have won, and went on to describe her as “a visual storyteller who works with extreme elements — fun, unpredictable elements and with humor — and who crosses borders and new boundaries.”

She made her debut in 1997 with Vida de Perros, the story of a little boy who sees clear similarities between himself and his dog. The jury citation makes clear that “Some of the characteristic features of Isol’s art were already present in this work: an expressive, sometimes explosive style with a muted color palette, double outlines and deliberate misregistration in the color printing of the motifs, where the lines and colors are not completely aligned.”

Her stories are humorous with surprising twists, occasionally philosophical and always subtle. The citation points out that Isol is on side of the children, seeing the world through their eyes and exposing through them the absurdities of the adult world. El Globo (2002) describes an angry, loud-mouthed mother who is transformed into a balloon. In Petit el monstruo (2007), a child tries to figure out why his behavior is considered praiseworthy on one occasion but cause for scolding on another.

She was also praised for “constantly exploring new formats and forms for the books themselves.” Tener Un Patito Es Util (2007), for example can be read from two directions with two different results: one story related what a boy can use a duck for, while the other story shows what a duck can use a boy for. Nocturno (2011) is about night dreams, printed in fluorescent colors meant to be enjoyed in the dark. As the citation states, “Isol’s great talent as a picturebook author is apparent in the overall experience created by the dramatic composition, the choice of colors and the intensity of the drawn line.”

It’s interesting to note that although the award is given by the Swedish government, Isol’s books have yet to be published in Sweden. Kerstin Brunnberg, the Chairperson of the Swedish Arts Council had this to say: “Her books have been published in some twenty countries, but not in Sweden. It´s my hope that the jury’s choice of recipient 2013 will lead to increased international knowledge of Isol and that her books will be published in Swedish within a near future.”

The award will be presented to Isol at a ceremony in Stockholm on May 27th.