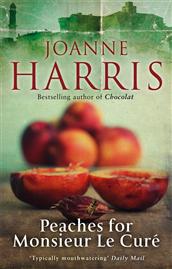 Buyers of the book at Waterstones stores will get an exclusive online chapter.

The Independent reports that several major bookstore chains in the UK are making use of new marketing tactics to lure customers into their stores and away from on-line competitors.

For instance, customers who purchase the new Joanne Harris paperback Peaches for Monsieur le Cure from Waterstones when it is released later this month will get the bonus of an added chapter not included in books sold anywhere else, after the book chain signed off an exclusive deal with the author.

Harris says that the bonus chapter can be read as an epilogue or as “the prologue to an as-yet-unwritten story.” And while the added content may not be essential to the plot of Peaches, a follow-up to the best selling Chocolat, Waterstones has high hopes that the extra material will be enough to “persuade Harris fans to shun Amazon and other web retailers in favor of a trip to the High Street.”

In another example, Foyles recently offered customers the opportunity to buy copies of Alexander McCall Smith’s novel Trains and Lovers, which included a small booklet which contained an extra short story by Smith. While Claire Tomlinson’s biography of Charles Dickens, in a very limited edition with gold foil, a map of London, and extra material, was made available only at Waterstones.

The paper wondered whether these tactics were anything more “than merely the final writhings of a fish out of water, or do they represent a genuine lifeline for booksellers?”

Tom Tivnan, features editor at The Bookseller responded:  “Of course these things are viable options. All bookshops are having to innovate and do special things to survive. It’s part of the whole package of how to reform themselves. They have to workout what things they can do that online retailers can’t.”

Tivnan pointed out that it isn’t merely nostalgia for the classic bookshop that compels authors into offering these deals. “One of the buzzwords in publishing and bookselling is ‘discoverability.’

“Authors are unanimous on this. The place to discover a new book is not on Amazon. It is browsing through a bookshop or a library. Physical bookshops have to survive. Authors and publishers really want to keep bookshops and libraries open. Particularly mid-rank authors, lower down than Joanne Harris or Ian Rankin [who added a bonus essay to a bookshop-only version of a recent novel.]”

For British readers and publishers, the stakes couldn’t be higher. More than 400 bookshops closed in 2012, seven times more than 2011. There are now fewer than 2,000 bookshops in the country, less than half the number of just seven years ago.