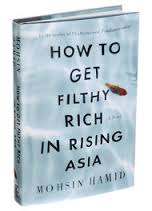 In today’s feature story, “What Do Asians Really Want to Read?” Duncan Jepson notes that Asian culture is fixated on hard work and getting ahead (something that jives with the observations in Tuesday’s feature, “The Beijing-to-Bologna Time Machine”). Books that cater to these desires have potential to reach a wide audience. It is, to be frank, not so different from anywhere else in the world. Merely think of the global success of Walter Isaacson’s biography of Steve Jobs.

One immediately thinks of Horatio Alger’s rags-to-riches stories and their modern iterations, several of which are being published this year. Some, like Moshin Hamid’s How to Get Filthy Rich in a Rising Asia, approach the topic with irony. Others, like Kevin Kwan’s Crazy Rich Asians, are playing directly to the voyeur in all of us.

As Jepson notes, business books are always among some of the top selling titles. Think of the global success of Walter Isaacson’s biography of Steve Jobs or of the continuing popularity of Robin Sharma’s The Monk Who Sold His Ferrari, a book that is one of those occassional examples of a title that has remained a global bestseller — tens of millions of copies sold and translated into 70 languages — without every quite catching on in the United States.

But I want to posit another potential source of enlightenment for publishers mining for what readers want. Take a look at what gets pirated. We’ve often heard the phrase, that “piracy is just unmet demand.” And this is true, though it is typically uttered solely in the context of digital publishing. But print can be an equally intriguing indicator of what readers want — after all, print pirates have to commit resources too and they are just as risk averse as any business.

It’s a cliche that you can tell a lot about a person by the books they read. Books, especially nonfiction titles, are often purchased because they promise something and we as readers want something from them. Maybe its edification, enlightenment or merely entertainment.

To understand a person, look at their bookshelves to see who they want to be or become — especially the unread titles, as they will indicate an investment someone has made, no matter how small, that remains unrealized.

And so I posit, if you want to see what a culture wants to become, just look at the patterns of the books that are pirated. From that, you might just be able to extrapolate a future bestseller.

Agree, disagree, let us know what you think in the comments.