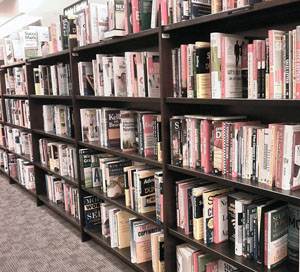 As consumers switch from print to digital formats, they also switch from bookshops to e-tailers. British consumers bought more books in 2012 than in the previous year, but spent less on them, according to Bowker Market Research, who released detailed figures about the UK market at its annual Books & Consumers Conference in London yesterday.

Source of purchase revealed a new trend according to Bowker. For the first time, 2012 saw more books bought from online-only businesses than from booksellers with bricks-and-mortar stores. While in value terms, there was more spent through physical bookstores than online retailers — and physical bookstores also sold more print books, in both volume and value — in terms of overall volume sales, online businesses outstripped physical stores. The reason is unsurprising: it is due to online stores’ continuing dominance in the ebook market, where the research estimates they have a 95% share. And no prizes for guessing who has the largest chunk of that 95%…our friends from Seattle.

While traditional bricks-and-mortar bookstores can take comfort from the fact that they were well ahead on sales of printed books, the research made the observation that “when consumers start to switch from print to digital formats, they also switch from bookshops to e-tailers for their remaining printed book purchases.”

Readers Not Abandoning Print, Yet

Yet physical bookshops remained the leading source of discovery when it came to browsing, “with nearly twice as many book purchases found by browsing in shops than by browsing online in 2012.” The research also suggests that gifting remains key to printed book sales; ebook sales reached a 12% market share peak in Q3, but dropped to 10% in Q4 when consumers bought proportionately more printed books in the run-up to Christmas.

Paperbacks continue to take a hammering from digital, with their share falling from nearly nine in every ten purchases in this category in 2010, to two in three in 2012.

In genres, fiction — both printed and digital — faired much better than non-fiction, with double-digit growth in value over 2011. Despite ebooks taking a larger than average share of purchases in areas like true crime, travel writing, humor and mind-body-spirit, non-fiction sales declined by 10%.

Not surprisingly, there has been another increase in buying books online, rather than in person. The online share increased from 36% to 42% in 2012, and has doubled since 2008.

Lastly, devices. There is now a touch of the Consumer Electronics Show about these reports, as the importance of tablets and mobile phones grows in the book industry. There were some surprises here. “While ebooks accounted for a significant proportion of book purchases by those with tablets and dedicated ereaders, the majority of the books bought by these consumers in 2012 were still in printed formats, while the majority of book buyers still didn’t own either a tablet or a dedicated ereader by the end of the year.”

People who are buying ebooks are buying them to read on dedicated readers, rather than multifunction devices, but Bowker said that the ereader share had, in fact, fallen during the year, “and for 2012 overall was significantly lower in adult non-fiction and younger children’s books than for adult fiction and YA books.”

Finally — and it could be a figure to watch as Samsung’s screens grow ever larger — 1 in 20 ebooks purchased in 2012 were bought primarily to read on a smartphone, with 1 in 8 bought to read while commuting.

DISCUSS: There’s a General Global Decline in Book Sales, Why?