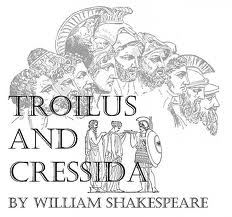 As Publishing Perspectives’ epic journey through the plays and sonnets of William Shakespeare continues at The Play’s The Thing, we turn from one of his greatest comedies, Twelfth Night, to one of the darkest, most cynical, and most “modern” feeling of all his works, the first of the so-called “problem plays,” Troilus and Cressida.

It’s the Trojan War as you’ve rarely seen it. In place of Homer’s heroic glorification, Shakespeare gives us a scathing satire on the glory and chivalry of the Trojan War (and by extension all wars), which in this play seems to be little more than an excuse for lust, vanity, and misogyny. Or, as the play’s most cynical character (and one of the most cynical characters in all of literature) so eloquently puts it, “Lechery, lechery, still, wars and lechery: nothing else holds fashion.”

It’s a marvelous work, one so far ahead of its time that it didn’t really reach an audience until the beginning of the twentieth century, and was described by one critic as “the work of a man whose soul is poisoned with filth.” Our exploration of the play begins tomorrow, Wednesday the 6th. We hope you’ll join us.

Buy the play and join our Shakespeare group reading project, The Play’s The Thing.