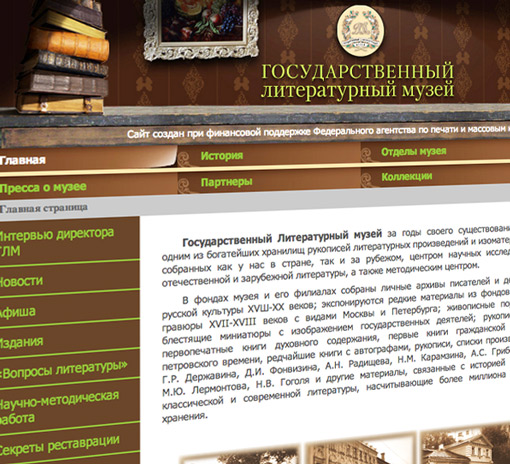 “If you get a feeling of what’s happening in writing today, you get a fresh viewpoint for looking at Pushkin or Turgenev.” Website of the State Literary Museum of Russia: www.goslitmuz.ru/

In the context of today’s feature story, “Saving and Translating Timbuktu’s Ancient Libraries,” where it is reported that among the many discoveries were several manuscripts simliar to novels — thus discrediting the notion that sub-Saharan African societies were exclusively dependent on the oral tradition — it is interesting to note just how important present-day analysis can shed new light on the past.

But you don’t have to be looking at the ancients, of which there is limited information, to find new discoveries. The same goes for the classics in the canon.

Russia Behind the Headlines reported on a recent discussion Dmitri Bak, the new director of Russia’s State Museum of Literature, held with several journalists about developments at the museum and to emphasize how classic Russian literature “needs to be understood through the contemporary.”

“What’s so bad about making a brand out of great Russian literature?”

Bak outlined his objectives, including increasing links with literature museums abroad, establishing grants, and developing projects with both international and Russian perspectives, while calling on his staff to make note of contemporary literature.

“In their own time, Tolstoy, Dostoevsky, and Pushkin were not ‘classics,’ but just normal men. No one who picked up a copy of Dostoevsky’s Poor Folk would have guessed that he bore in hand a work by the future author of The Brothers Karamazov. We can only grasp this classic literature through its contemporariety,” Bak told Izvestia.

Bak plans to transform the museum into a forum for promoting literary discussions, involvement in book fairs and festivals, and literature awards.

“When it comes to the Literature Museum, we are dealing with a kind of pyramid whose broad base is the richest imaginable corpus of national heritage – a treasure-house of incalculable extent,” said Bak. “[And] atop that pyramid is a kind of cliché we call ‘Great Russian Literature.’”

“…Reclaiming literature, and making it the property of us all — it’s a tricky job. No one has the slightest doubt how to exhibit ‘The Coronation of the Blessed Virgin’ by Paolo Veronese.  No matter how it is displayed, it’ll still remain a masterpiece, and people will flock to see it. But try doing the same with books? Few people have much of an idea,” Bak said in an interview with Bolshoi Gorod magazine.

“What’s so bad about making a brand out of great Russian literature?” he said. “People like to moan: ‘Where are the Tolstoys and Dostoevskys nowadays, eh?’ Or: ‘Your poets, sitting about in literary cafes – are they Gumilev or Blok, are they? But I reply: ‘Well, actually they might really turn out to be them.’

“Literary rebranding, overall, consists of taking ordinary authors whom nobody has heard of — like Yevgenia Vodolazkina (a finalist in the 2010 Big Book Awards) — and suggesting that they might be a big literary name in the future,” suggested Bak.

“You actually have to tell people this stuff. It’s not about book presentations, but a systematic process of osmosis into people’s consciousness about what really great literature can be and continues to be — so they can feel how great it is really, watch how it’s crafted,” he said.

“I don’t mean with Pushkin’s work: I mean starting with modern writing. If you get a feeling of what’s happening in today’s writing, you get a fresh viewpoint for looking at Pushkin or Turgenev.”

The State Museum of Literature was founded in 1934, and remains the sole large-scale museum in Russian dedicated to literature.

So tell us, what kinds of exhibits, discussions and presentations do you think would be most beneficial to shedding light on classics — as seen through a contemporary lens — in a museum or archaeological context?