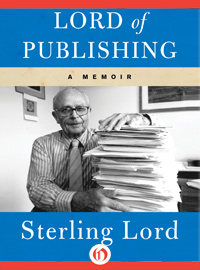 Is the romance of publishing extinct? I don’t think so. At least not yet, not entirely. Is the romance of publishing extinct? Gone the way of liquor-fueled lunches at Michael’s, evenings at Elaine’s and offices with doors?

Has publishing been reduced, by and large, to a soulless hustle?

In today’s feature story — Sixty Years of Sterling Wisdom from the “Lord of Publishing” — legendary 92-year-old literary agent Sterling Lord suggests as much, noting that the business-first ethic in today’s industry has turned publishing into a business driven not by a love of art, but by the bottom line.

For some, this meant parties.

Yes, there still was a time not so long ago when publishers would make an event out of the launch of a hot, new book. It was routine for publisher to rent out one of New York’s biggest venues — a night club or an entire hotel restaurant — to fete the launch of a new book by a writer. Hollywood stars would show up and flirt with editors; drinks would be spilled, egos built up and crushed, relationships established. (An invitation to “like” someone’s page on Facebook and an invitation to have a rushed coffee at a conference hardly feels the same.)

For some, it was simply being sent on a book tour where you could expect a car waiting for you, a decent hotel, and bookstore full of fans.

For some, it was the feeling of being respected for what you had to say and how you said it, instead of how well you sold.

Most of all, the proverbial romance of publishing is linked to exclusivity and prestige. And, depending on your point of view, changes in the industry has been stripping publishing of its exclusivity and glamour — honestly, today, nearly anyone can publish, though precious few do it very, very well.

But is it fair to say that the romance of publishing is extinct? I don’t think so. At least not yet, not entirely.

And publishing remains a business driven, in large part, by hope. Because if you ask any writer or publisher about the books they produce they will admit that they have no idea if they will sell or not. Hope is the first step in publishing a book.

And publishers by-and-large are passionate. They need to be in order to sustain themselves in what appears to be a world increasingly hostile to an industry largely fueled by hope. They hope a book might change a mind or the world, might entertain or distract someone from their woes, or else provide them with a new way of thinking about themselves, their history or their community.

Hope and passion. If publishing loses those, then the romance will, indeed, be dead.