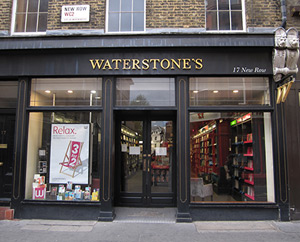 A bookshop window can be a stepping stone to a digital campaign – one that the public unknowingly runs for you. The British TV series Mr Selfridge, coming in March to the US, tells the story of the birth of the famous store on London’s Oxford Street. It’s not quite Downton Abbey, but it garnered a considerable number of fans in UK, where it began its run earlier this year and continues to be broadcast. While its relevance to the book industry might seem tangential — though it was born as a book Lindy Woodhead’s biography Shopping, Seduction & Mr Selfridge — episodes frequently touch on window displays and their importance. Selfridge claims to have invented the very idea of modern window dressing. All this prompted a train of thought. Bookshop window displays — remember those? Whatever happened to them?

In the UK, it can seem like a dying art — almost as if, where bookshops are concerned, the word “window-dresser” will soon become obsolete, like “chimney-sweep.” Yet many fondly remember their Eighties and Nineties heyday, before the chains moved in and realised you could charge for these spaces, before bland promotional posters rolled out across the estate became the order of the day.

Windows often seemed like miniature film sets back then. Here’s Waterstones’ Brand Communications Manager Jon Howells, fondly recalling those golden days when he ran stores during the Nineties at Ottakar’s, the chain that was bought by Waterstones in 2006. God, those windows! Ottakar’s was well known for papier mache creations, hand-painted posters and the like — often very good, sometimes bordering on genius, occasionally pretty awful. Shops didn’t have a window dresser, but most had someone a touch artistic who was keen to be let loose on displays, and shops had more staff in those days so it was quite feasible to let someone take the best part of a day creating a display that would only be in the window a few days. Things like crime scene tape, outlined bodies, deckchairs etc were the norm, so much so they became clichéd.

“I can only remember a couple of examples of my own. One was for Douglas Adams’ Mostly Harmless in the early ’90s. The cover featured a giant pink arrow pointing at a tiny planet Earth. So I made a giant, eight-foot pink arrow, cleaning out all of Salisbury’s stationers in one swoop. It was pointing at a small globe. I thought it looked pretty amazing, but whether it sold more books than putting a small pile in front of a poster would have, we’ll never know.

“My other example was the Christmas window. Shops were encouraged to go all out on these — trees, sleds, snowmen. Papier mache reindeer were endemic — if we’d culled them they’d have probably entered the food chain. My nadir was creating a rooftop and chimney out of old TBS [Random House distributor] boxes and sticking a pair of red boots out of the chimney, indicating Father Christmas had come a cropper. Shameful.”

A Sense of Theater

Others have similar memories. Kate Gunning, now Key Account Manager, Independent Clients, for Random House, spent many years with Watersones, and recalls the High Street Kensington branch’s unusual window for Isabel Allende’s Stories of Eva Luna. “We had a naked woman on a chaise longue in the window, with a strategically positioned copy of the book. It literally stopped the traffic and ended up in the national press. We had lots of freedom then. I remember the novel House of Leaves [Mark Danielewski]. We had someone who tore all the pages out of the book and then pasted them all over the window. It threw the shop into a sort of watery half-light. We had a customer say they’d got off the bus especially to see what was going on. I think customers like a sense of theater.”

Interestingly, Gunning went on to work at Selfridges herself, running the book department, and recalls the importance of windows to the store. “Selfridges had that sense of theatre down to a fine art. People would say ‘Have you seen the Christmas window?’ I remember once we had a life-size model of Nigella Lawson [who is, of course, a cookery author] made out of chocolate. Shoppers have a thirst for something a little bit different — they’re quite beguiled by that. I do think that with all the talk about ‘the bookshop experience,’ then windows are a part of that. A sense of theater is not something I’d associate with Net retailing.”

“It’s Field of Dreams for the digital age: if you display it, they will post. And tweet. And pin.”

A frustrated jazzer, I can remember trying to create a hipster’s room in the window of Websters Bookshop in Croydon in the early Eighties for a music promotion. The tenor saxophone has gone, but I still have the black and white pictures of Coltrane and Bird.

Former Borders UK CEO Philip Downer has fond memories of eccentric windows too — even if he can’t always remember the titles. “I know we had a naked man in the window of Charing Cross Road once, but don’t ask me what the book was. Dillons in Gower Street used to do some interesting things, and Hatchards always felt it had a relationship with Fortunm & Mason next door who still have interesting windows.

“It can be done — but it costs money — and if someone is going to pay you £200, or whatever, to put up a poster, well…I’ve just read the book of Mr Selfridge. It talks about how windows used to be about cramming in as much as possible, whereas today they contain relatively little but appeal to what customers aspire to. Selfridges invented the modern window.”

Downer has just opened his own independent book and gift shop, Calliope, in the well-heeled Surrey town of Dorking. “We’re trying to be imaginative here, and make the whole shop a series of windows. We’re building our displays around what we think customers will like, and we’re making connections. So we have Elizabeth David cookery titles with Persephone Classics and a tasteful jug or two.”

Foyles does have a window-dresser today, although Jeff Clark’s title is designer. Sometimes he works with publishers to create a window, but more often he designs bespoke graphics and layout from scratch. He was particularly pleased with a Summer Reading campaign that featured a poster of butterflies laid out as in a collector’s specimen box. “In the window itself I placed about 500 cut out butterflies stuck to the wall. They took ages to cut out, but the effect was amazing. People were really captivated by it, posing in front of it, taking photographs and posting them on Twitter and Facebook.”

This is a good example of how a window can be a stepping stone to a digital campaign – one that the public unknowingly runs for you. It’s Field of Dreams for the digital age: if you display it, they will post. And tweet. And pin. Clark says there is a direct sales benefit. “If we are featuring a single title we almost always see an increase in market share for the promotional period. With a window such as the Summer Reading the effect is more spread out as it contains multiple titles. Although we obviously want to sell books from the window, it is also about attracting people into the shop and enticing their curiosity so they discover more, which we can do by creating in a window a microcosm of the in store range. To take a non-book example as well, every time we put in a DVD window, sales of DVDs always increase. But it is not necessarily the DVDs in the display that are sold, it is more about making people aware that we have a DVD section. The same applies with things like the Languages and Childrens’ departments.”

Of course, the shop window for many stores now is the laptop, tablet or mobile. But many book jackets appear small on retailer’s websites, and the template is often crowded. There are interviews with authors, but you have to search for them. Is there enough book content on YouTube?  Where is the book equivalent of Gangnam Style or Harlem Shake? Perhaps there is a need for more cinematic book trailers or extracts — but this all takes time and money and, outside of the major brand properties, are the revenue benefits there?

Equally, it’s easy to forget that these are still very early days in the digital world.  YouTube was only founded in 2005. Digital natives coming into the industry now feel the same creative impulses that drove the papier-mache wielders of old. It seems reasonable to suggest that ways of ‘displaying’ and marketing to mobiles and tablets — or, indeed, on digital panels that we might pass on the street, have their best days to come.

Here’s a view from elsewhere. Tilly Lloyd, at the award-winning independent Unity Books in Wellington, New Zealand, says window-dressing is certainly not a lost art in the antipodes and sums up the offline and online approaches succinctly. “Shop window displays totally have it over online display in terms of capacity for quirky connection and ‘set design’ impact. But online visuals have it over shop windows in capacity of viewings.”

It’s all too easy to slip down the road marked “It was better then,” and we’re all guilty of this sometimes. Perhaps inevitably, Waterstone’s Howells says: “Nowadays, we think it’s best to highlight the books, with some sympathetic and hopefully eye-catching POS. There are no paid windows in Waterstone’s anymore. All in all I think our approach is for the best. Windows absolutely do have a point — to indicate that instore is a treasure trove of books, to showcase new and interesting titles. That’s what we try to achieve now, and I think we’re better at it than we have been for a long time.”

But there’s no doubt, some of that papier mache stuff was fun!

DISCUSS: Where is the Book Equivalent of the Harlem Shake?