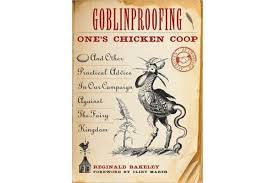 In a near landslide victory, a “supernaturally tinged barnyard manual” has triumphed, winning Britain’s oddest literary award, the Diagram Prize given for the year’s oddest book title. Goblinproofing One’s Chicken Coop won an astonishing 38% of the vote, beating out such sure-fire competitors as How Tea Cosies changed the World and God’s Doodle: The Life and Times of the Penis.

Robert Bent, The Bookseller‘s diarist and custodian of the prize, said: “In Goblinproofing One’s Chicken Coop, the public has chosen a hugely important work regarding the best way to protect one’s fowl from the fairy realm’s most bothersome creatures. Everyone knows well the hazards cats, dogs, and foxes hold for owners of chickens, not to mention red mite, but the public has recognized the need to illuminate this hitherto under-reported nuisance.”

Bent added, “It is perhaps no coincidence in these austere times that a book aimed to assist members of the public frugally farming their own produce proved the most popular title on our six-strong shortlist. I also illustrates that the public at large is afflicted by an incredible amount of paranoia regarding the threat foreign invaders pose to their property.”

The book, written by Reginald Bakeley, and published by Conari Press, includes a foreword by its U.S. editor Clint Marsh.

March, on receiving the news of Bakeley’s glorious victory, had this to say: “On behalf of Reginald Bakeley and Conari Press, I am honoured to accept this award. The Diagram Prize celebrates the playfulness that is at the hart of much of the world’s best book publishing. Thank you to everyone who voted and allowed Goblinproofing to join the distinguished list of Diagram winners. Reginald and I take this as a clear sign that people have had enough of goblins in their chicken coops. Our campaign against the fairy kingdom continues.”

The Diagram Prize Shortlist and Share of the Vote

As described by The Bookseller, the Diagram Prize, which is celebrating its 35th anniversary this year, was founded as a way to avoid boredom at the Frankfurt Book Fair. Bruce Robinson, founder of the Diagram Group, a publishing solutions firm, established the first prize in 1978, with the crown going to Proceedings of the Second International Workshop on Nude Mice.

Although the winner receives no actual award, the nominator of the title, in this year’s case Deep Books’ marketing manager Alan Ritchie, will receive a bottle of wine.