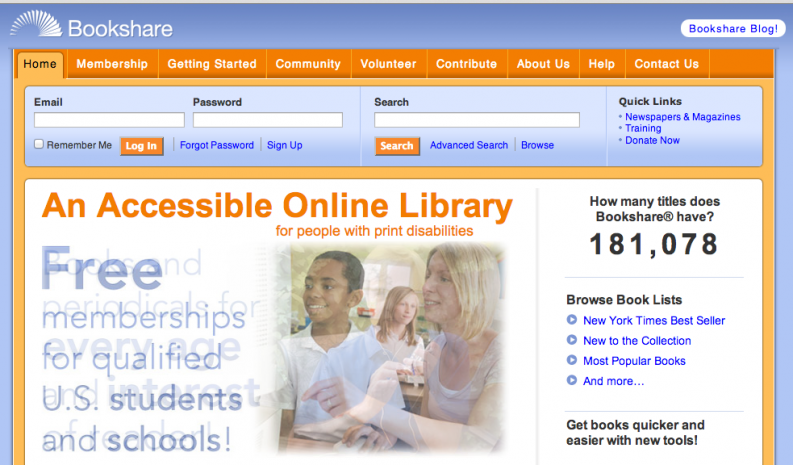 Bookshare is a non-profit seeding literacy for those to whom it doesn’t come easily.

I’ve been dipping my big toe into the waters of how accessible literature is for those with print disabilities, something that recently grabbed my interest as I walked past the New York Public Library’s Andrew Heiskill Braille and Talking Book Library in Manhattan’s Chelsea neighborhood. While I’ve barely cut into the surface of this huge subject, I’ve had interesting conversations with several people who wear different hats in the world of the visually impaired: a teacher at a school for the blind, a librarian at the aforementioned NYPL branch, and a woman who secures contracts from publishers for a non-profit organization which makes content more available to those who need it. The more I learned, the larger the subject became (global, even), with a plethora of distracting corners in a Pandora’s Box of sorts.

Bookshare, a non-profit wing of the larger philanthropic agency Benetech, is a member-based organization that provides content to those with an inability or difficulty to read print (known as print disability) in the form of DAISY book digital files (Digital Accessible Information System). Of their 250,000 members, approximately 240,000 of them are students who don’t pay for their memberships, largely thanks to a 5-year federal grant from OSEP (the Office of Special Education Programs). While this helps to push content into the scholastic population by offering free memberships, acquiring said content is a trickier and evolving issue.

More and more publishers provide accessible, DAISY-compliant content to Bookshare at no cost.

Robin Seaman, the Director of Content Acquisition of Bookshare, is on the front lines of this vast endeavor. She explained how she gathered the vast collection of material. Bookshare, which just celebrated its 10th anniversary, had relied solely on volunteers to scan materials and make them available. But this posed a problem: accessibility should have an element of timeliness, and needless to say, relying on volunteers means it was often unpredictable just when material would be made accessible.

These days, more and more publishers rise to the occasion by offering digital files of their content without any money ever exchanging hands. “We have 200 publishers who have made their front and back catalogs fully available to us, including Random House, Hachette, and Simon & Schuster. Scholastic was a very important early supporter. There are also thirty university presses that are hugely supportive, as well as trade presses.”

The politics of content accessibility are real. In the United States, copyright legislation has changed the course of literacy for future generations with a major tweak to copyright law called the Chafee Amendment (signed into law in 1996), which established that all content should be available for free in the United States to the following three populations: 1) those who are blind or have low vision; 2) those who are severely dyslexic, and 3) those with mobility impairment which would render them unable to hold a book or turn a page.

In this post-Chafee Amendment world, Bookshare doesn’t need publishers’ approval to duplicate their material, but with their cooperation it certainly makes it easier, faster, and cheaper to get content into members hands as quickly as possible. “This process is political, in the best sense of the word…it’s been so gratifying for the publishers who are our partners in this social justice issue,” says Seaman.

Even with their cooperation, the problem that remains is that the front end of the book publishing business could be smarter when it comes to producing books with accessibility in mind. This has led Benetech to shepherd forth a mammoth five year R&D undertaking called DIAGRAM, which aims to educate publishers about how to make content fully accessible for everyone from the very beginning of the process. They’re partnering with WGBH National Center for Accessible Media (NCAM), who has a solid track record in Accessibility, having spearheaded Closed Captioning.

“Enhanced e-books are hugely challenging” in terms of converting the experience into verbal descriptions, but Bookshare is working apps to solve that challenge.

Surprisingly, up to 80% of Bookshare’s members are “sighted” but have severe learning disabilities, and so making images available to them has been an ongoing issue. If you keep the images intact in digital files, they must still be accessible — in other words, described via audio for those who cannot see them — and so Bookshare has created an image describing software called Poet, and organized supporting events called Image Slams. At these slams, people gather around a table, look at of hundreds or thousands of images, and provide verbal descriptions. This becomes very subjective, of course, and so a series of guidelines has been put in place to help steer the volunteer poets. Reading the directions to Poet is like falling face first into the middle of a David Mamet play. “This is the first rule of description: what you see is what you describe. One sees physical appearances and actions; one does not see motivations or intentions. Never describe what you think you see.” Or, “Go from the general to the specific. Start generally, creating a context, then move to details to enhance understanding and appreciation. Provide visual perspective as appropriate and as time allows. The initial information presented about a scene will create a foundation in the minds of the audience members.”

As the technology of ebooks evolves, Bookshare’s own technology needs to continue evolving with it. “Novels and textbooks are no brainers — you scan them and make your digital file — but enhanced ebooks are hugely challenging, and so we’re working on specialized apps for things like embedded video,” says Seaman.

The Chafee Amendment only covers domestic rights, and Bookshare is aggressively serving third world countries as well. They have a huge international presence with members from 40 countries around the world. “We work with libraries for the blind, and they help us get members. We have a lot of traction in India, Australia, and New Zealand, and we’re particularly interested in being in developing countries, such as Ghana and Kenya. We’re also in Qatar, and the United Arab Emirates,” says Seaman. The cause, she says, is spurred by nothing less than spreading democracy.

Where does all of this digital accessibility leave Braille? “For a profoundly blind person Braille is very important for literacy,” says Seaman. “With Braille you learn literacy in a more traditional way. You learn grammar; you learn how to spell. In our catalog of 180,000 books, all can be read on a refreshable Braille display machine.”

Teachers concur — the convenience of talking books is a boon, but a lot of learning, and at ones’ own pace, still happens best with Braille. “The technology is fabulous and everyone should avail themselves to it, but Braille still has its advantages,” explains Pam Kuzmicki, Special Education teacher at the Overbrook School for the Blind in Overbrook, PA. “Fluent readers can get through material faster if they read from Braille. This helps kids who are trying to manage their time in college or a work environment.”

Walking into the Albert Library for the Blind in New York, I was struck by how sparse the shelves were. The library is two stories. The first floor has a meeting room where the community congregates for lectures or other gatherings, a reference desk, a few shelves of blue-cased digital “Talking Books” (Talking Books are not analogous to Audio Books in that they sound robotic), and a few shelves of large-print books, which leaned heavily on the mystery and romance genres.

Upstairs was the Braille library, a room with stacks filled with volumes of bound Braille,. Seaman had told me that Harry Potter would stand four feet tall in embossed Braille, so it came to no surprise to me that Crime and Punishment took up six bulky volumes, or the better part of one shelf. It was poignant, too, to see a children’s section with thick classics like Peter Pan, all available to children with the scanning of a finger. If it were up to Kuzmicki, all blind children would be reading Peter Pan in Braille. “Stats show that majority of blind people who work, something like 85% of them, are able read Braille. I’m not sure why it makes them more employable, but maybe it’s simply that they’re older workers who didn’t have the newer technology. It will be interesting to see how that changes with the kids who will be entering the workforce.”

Seeing the huge undertaking that is Braille makes it understandable that less than 5% of all published books (including periodicals, textbooks, and consumer trade) are available in an accessible format, whether embossed or digital. With Bookshare on the front lines of accessibility, hopefully this dreadful statistic will change.