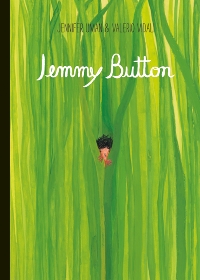 An illustration from the book Jemmy Button

Take, for example, the gorgeously illustrated new children’s book from Templar Books (Candlewick Press). Jemmy Button by Jennifer Uman and Valerio Vidali (with words by Alix Barzelay), is based on the true story of Orundellico, a native of Tierra del Fuego who was brought to England as a young boy in the early 1800s by Captain Robert FitzRoy (who renamed him Jemmy Button) on the HMS Beagle to educate him in the ways of Christianity and Victorian upper-class customs. (In 1832, Captain FitzRoy returned Jemmy to Tierra del Fuego on the same HMS Beagle, accompanied by none other than Charles Darwin. As the ship approached shore, Jemmy knew he was home and there, with great effort, he relearned his language and came to understand where it was that he truly belonged.) It is a beautiful book on every level. But almost as interesting as Jemmy’s story (and the art that tells it) is how the book came to be in the first place through a spontaneous online meeting I had the chance to speak with one of the book’s illustrators and creators, Jennifer Uman, who told me the whole story.

“I saw Valerio’s work online and reached out to him. I’d never done that before, I’m really pretty shy. But I saw his body of work and thought he was a seasoned older illustrator — I had no idea he was so young, just 22 years old. I reached out to him and it was immediate. He gravitated towards my work because it is primitive, and I gravitated towards his because it’s primitive but linear…it’s so beautiful. We took a lot from each other even before we met.

We started emailing back and forth, and he mentioned to me that when he came to America in a couple of months he was going to feel like Jemmy Button. I didn’t know the reference and I didn’t know the story, so I bought all the books I could find about him and realized that there couldn’t be a better book for us to work on together.

Valerio came to America for a three or four month stay, so we met to work in-person for the first time to work on the book. I spoke no Italian and he spoke no English, so we taught each other; we created our own language through the work we created together. We didn’t want words. We sat side by side and worked on the same piece of paper until the illustration was done and then moved on to the next. It’s interesting. Our work is very much collaborative, but his precision is flawless, and I am very primitive and heavy handed. To a blind eye, they might see the illustrations as homogenous, but I can see his work right away.

At any rate, by the end of that first visit we had four or five illustrations complete. We submitted it to a couple of book fairs to see if there was any interest, and really from there the book took on a life of its own. We got into Bologna and were recognized at levels we never expected. It went on tour in Japan, and we didn’t even have a book finished!

Everything about the process was exciting, but we didn’t realize just how powerful our work out be until it came together, and then we were just unstoppable. Although, I have to say that the entire process did take four years from meeting to the book coming out.

Jennifer and Valerio are planning to work together again, and have “a jillion ideas” for their next project.