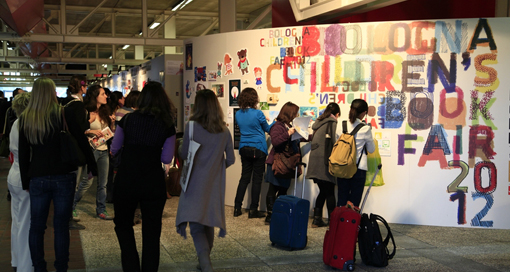 The 50th Bologna Children’s Book Fair, the largest book fair of its kind in the world, opens next Monday the 25th, and this year promises to be the biggest and best yet. Visitors to the Bologna Book Fair in 2012

“We are delighted to say that the Bologna Children’s Book Fair will celebrate its 50th anniversary with excellent attendance numbers,” said Program Director Roberta Chinni. “We have almost 1200 exhibitors registering 75 countries despite challenge economic conditions across the globe.”

Attending or wish you were attending? Here’s a rundown of some of what’s going to be happening:

Events kick off the day before the fair’s official opening with the 3rd TOC Bologna on Sunday March 24th. This year’s conference theme, “Play, Learn, Grow – Publishing for the Next Generation,” will highlight how learning, reading and play are key to a children’s development. Speakers will include Dominique Raccah, Sourcebook; Kristen McLean, Bookigee; Francesca Dow, Penguin; and Dr. Alice Wilder, educational psychologist. See the complete program.

This year’s Guest of Honour Country, Sweden, is exhibiting on the theme of children’s right to culture; the Illustrators Exhibition and this year’s program (both at the Fair and throughout Bologna) will reflect this theme, which is based on the United Nation’s Convention of Children’s Rights. Children and their families will also have the opportunity to meet Swedish illustrators and writers at events throughout the city, in cooperation with local partners. The opening of Sweden’s Exhibition is set for Monday, March 25th, with a speech by Sweden’s Minister of Culture, Mrs. Lena Adelsohn.

The number of exhibitors in the fair’s digital area in the O’Reilly TOC Pavillion has doubled compared with last year, and the Digital Café’s program has been further extended, with the theme “Children’s Publishing Goes Digital.”

And speaking of digital, the winners of the second BolognaRagazzi Digital Award have been announced:

The winners of the 2013 Bologna/Ragazzi Award have also been announced:

Among the awards still to come?

And of course there’ll be much much more. Chinni summed it up by saying, “We are hosting a full schedule of events to celebrate the anniversary and will endeavor to retrace the most significant moments, the key people and the moments in the journey of the fair so far. Bologna is all about the people and the stories they bring here.

At the same time, while celebrating the past 50 years, we feel the pressing need to look to the future and to work in order to adjust to the changes. As reading and stories develop in new ways on paper and now on screen it is that conversation and human interaction that Bologna will continue to offer and we believe that will make the next 50 years very bright for all of our wonderful friends, colleagues, and business partners.”