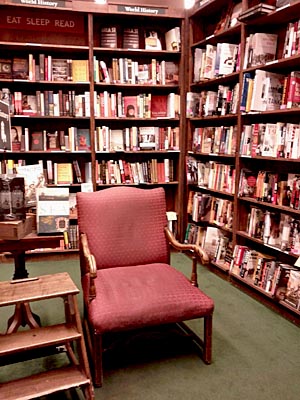 At the Tattered Cover, one of Denver's most loved independent bookstores

After years of ashes and sackcloth, it appears that the independent bookstore, for so long on so many people’s most endangered list, might be making a comeback.

An article in The Christian Science Monitor notes that even though bookstores still close down yearly, “sales at independent bookstores overall are rising, and new ones are popping up…Bookstores credit the modest increases to everything from the shutting of Borders to the rise of the ‘buy local’ movement to a get-‘er-done outlook among the indies that would shame Larry the Cable Guy.”

In fact, sales at independent bookstores rose nearly 8% in 2012 over 2011, according to an American Booksellers Association (ABA) survey. The CSM points out that this growth is even more remarkable when one takes into account that the sales at Barnes & Noble during that same period were so non-remarkable. “I think the worst days of the independents are behind them,” said Jim Milliot, co-editorial director of Publishers Weekly. “The demise of traditional print books has been a bit overblown. Everybody is a little anxious, but they are starting to think they’ve got it figured out for the time being.”

Wendy Welch, co-owner of Stone Gap, Virginia’s Tales of the Lonesome Pine and author of the acclaimed 2012 memoir, The Little Bookstore of Big Stone Gap (St. Martin’s Press), agrees. “2012 was the year of the bookstore,” she told the Monitor. “Jack and I will never be rich. But we found a place where people said there wasn’t a market and we said ‘yes there was.’ We feel like it’s important for bookslingers to hang together — we’ll hang together or we’ll hang separately…And we’re holding the line.”

And, as it turns out, independents are now seen by publishers as valued partners, needed for their print sales. In addition, their small size and low infrastructure, once seen as a negative during the rise of the book “superstores” is now seen as an advantage.

“We absolutely believe indies are the small, fast-moving mammals in this dynamic,” said Michael Tamblyn, chief content officer of Kobo, speaking at the ABA’s Winter Institute in Kansas City, Mo., in February. In November, Kobo, a Toronto-based e-reading company, partnered with the ABA to sell ereaders and ebooks at independent stores. So far, about 450 have signed on.”If ebooks are the asteroid hitting this planet, small independent bookstores are the ones most likely to come out the other side,” said Mr. Tamblyn.”