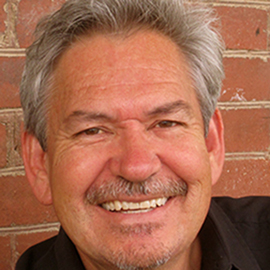 And then there was one. Benjamin Alire Saenz, poet, fiction writer, essayist, and chair of the Creative Writing Department at the University of Texas at El Paso, has written for years without achieving mainstream success. But that may be about to change. He has just been selected from a shortlist of five titles as the winner of this year’s PEN/Faulkner Award for Fiction for Everything Begins & Ends at the Kentucky Club (Cinco Puntos), a collection of seven stories set on the south Texas border of El Paso and Juarez.

Judge A.J. Verdelle was quoted in El Paso Inc. as saying, “ In Everything Begins & Ends at the Kentucky Club, his twentieth published book, Benjamin Alire Saenz shows how decades working at your craft gives birth to might and mastery…He presents a rendering of reality that is lush, tender, expansive, inclusive, and profound. The author takes stunning care with language — English, Spanish, and the languages of sunlight, daylight, dimlight, night light — twisting and tumbling with the whispered language of the human Heart. Saenz also devotes impressive attention to rendering communities on the borders of the Untied States and Mexico, on the boundaries of sexual and sexual expression, on the edge of despair, and on the cusp of redemption.”

Nelly Rosario, who also served as a judge added, “In Everything Begins & Ends at the Kentucky Club, Benjamin Aliere Saenz uses the straightest lines of language to encircle the muted light inside of each of his narrators. Their collective voices speak artlessly, as wisdom does, and ask us to listen for the borderless poetry of the spirit. To sit with Aliere-Saenz under the dimmed lights of The Kentucky Club is to lend an ear to a writer who has surrendered you the alphas and omegas of his heart.”

AS the winner of America’s largest peer juried prize for fiction, Saenz will receive $15,000 – each of the four other finalists, Amelia Grey for Threats (Farrar Straus Giroux), Laird Hunt for Kind One (Coffee House), T. Geronimo Johnson for Hold It ‘Til It Hurts (Coffee House), and Thomas Mallon for Watergate (Pantheon) receive $5,000. All five authors will be honored at the 33rd annual PEN/Faulkner Award Ceremony at the Folger Shakespeare Library in Washington D.C. on May 4th.